The next place Grayden and I visited on our Golden Anniversary trip to Britain was Exeter Cathedral.  Considering the sad events of this week at Notre Dame Cathedral, I was hesitant to share our visit to Exeter.  After thinking a bit about it I decided to still share.  We visited Notre Dame Cathedral in 1997.  One of the astounding things of visiting Europe is viewing ancient cathedrals.  The Cathedrals of Europe are certainly breathtakingly gorgeous.  To view such beautiful architecture that was built without modern machinery blows my mind!  Watching the news brought tears to my eyes and heart.  I still can't believe what has happened and I'm so glad the French are going to rebuild the magnificent heart of Paris!  Vive La France !  So no disrespect to Notre Dame Cathedral is intended in my post, but to show how magnificent these old cathedrals are.  Many of them have suffered similar fates in the past because of fire and bombings and have been bought back to glory.  In fact in May of 1942, Exeter Cathedral was hit by a bomb that destroyed St. James' Chapel on the southern side.  After WWII, it was rebuilt. 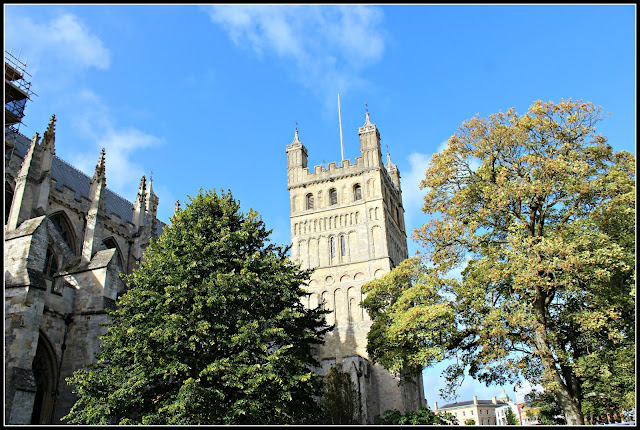 This is our first view of Exeter Cathedral as we parked our car on the street behind the lovely grounds.  Come along with us as we enter Exeter Cathedral that is officially known as the Cathedral Church of Saint Peter in Exeter.  This Anglican church is the seat of the Bishop of Exeter. 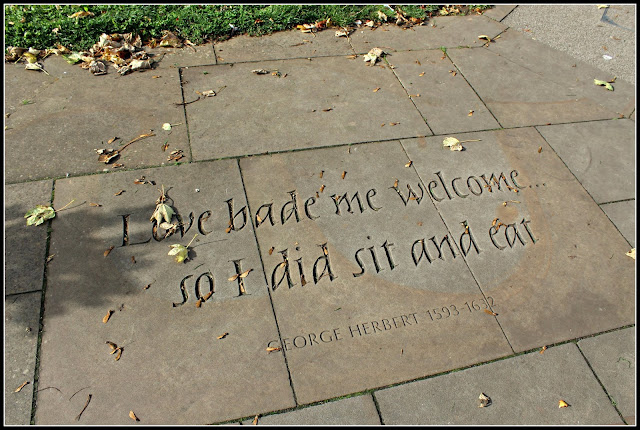 Maybe you know the poem or the hymn by George Herbert.  I really think it is appropriate for this Holy week.

Love bade me welcome. Yet my soul drew back

Guilty of dust and sin.

From my first entrance in,

Drew nearer to me, sweetly questioning,

If I lacked anything.

A guest, I answered, worthy to be here:

Love said, You shall be he.

I the unkind, ungrateful?  Ah my dear,

I cannot look on thee.

Love took my hand, and smiling did reply,

Who made the eyes, but I?

Truth Lord, but I have marred them: let my shame

Go where it doth deserve.

And know you not, says Love, who bore the blame?

My dear, then I will serve.

You must sit down, says Love, and taste my meat:

So I did sit and eat. 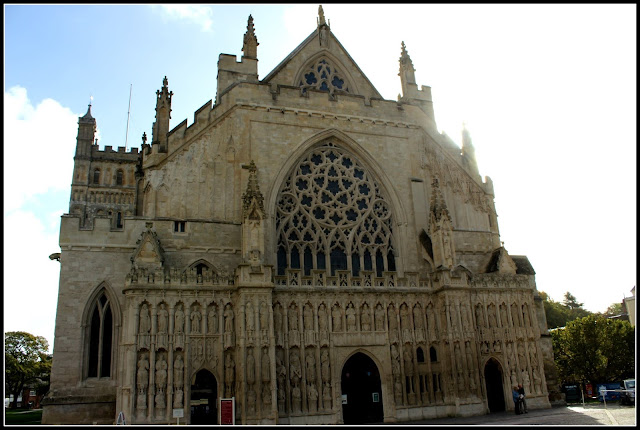 Stepping through the huge doors I am immediately struck by the magnificent quiet beauty of Exeter. 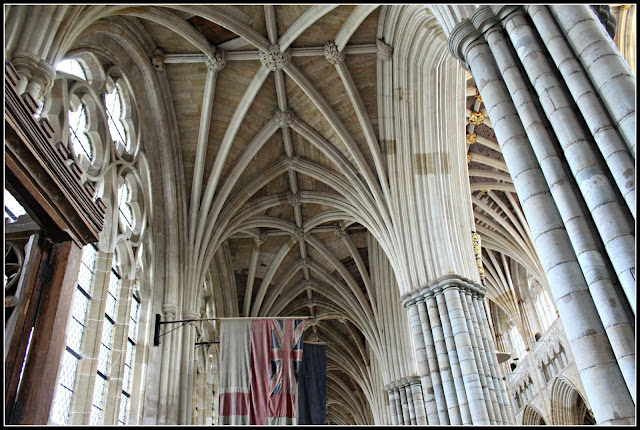 My eyes immediately gazed upward at the heavenly vaulted ceiling.  Exeter Cathedral's foundation was begun in 1133.  Think about that for a moment...Starting with the Norman style and then in 1258 was rebuilt in Gothic style. The massive Norman towers were kept.  In 1400 the cathedral was complete.  It is made of local Purbeck marble from nearby Dorset. 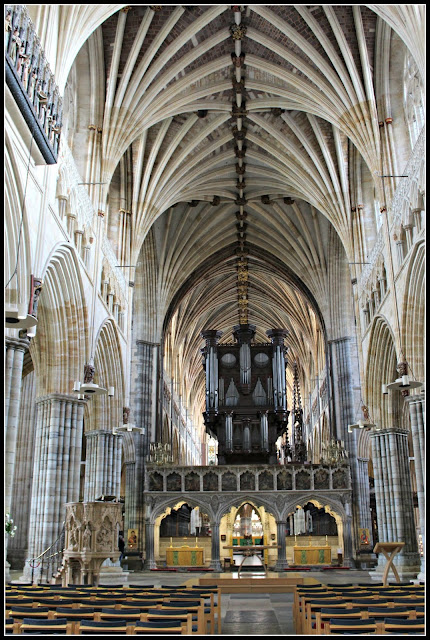 Stepping into the nave of Exeter Cathedral we learn it has the longest continuous medieval stone vaulted roof in the world.  It is amazing!  Cathedral's were built to glorify God and I certainly feel that here. 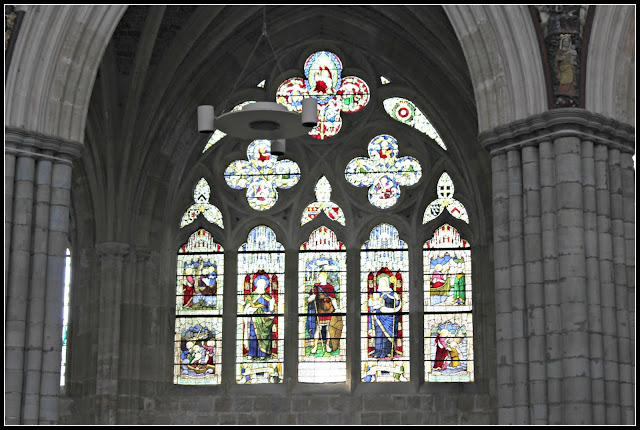 Stained glass windows adorn the cathedral in every arch. 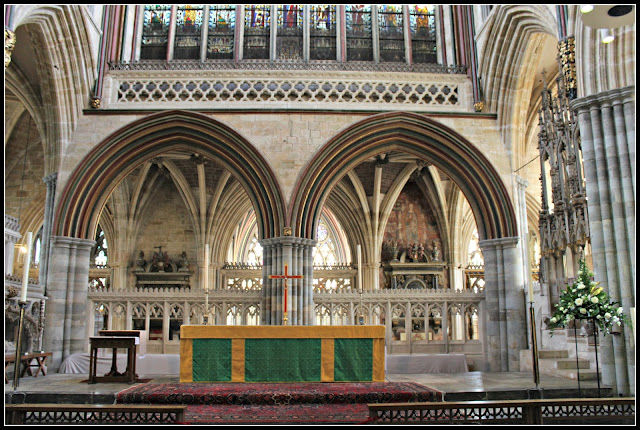 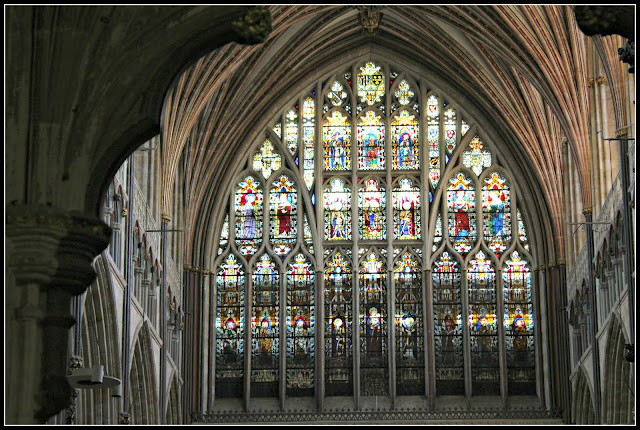 Above the high altar is the Great East Window.  This window contains glass from medieval times.  The figures of Abraham, Moses, and Isaiah still have their original faces.  During WWII this glass was removed along with other precious items.  All the other glass was destroyed during the bombings. 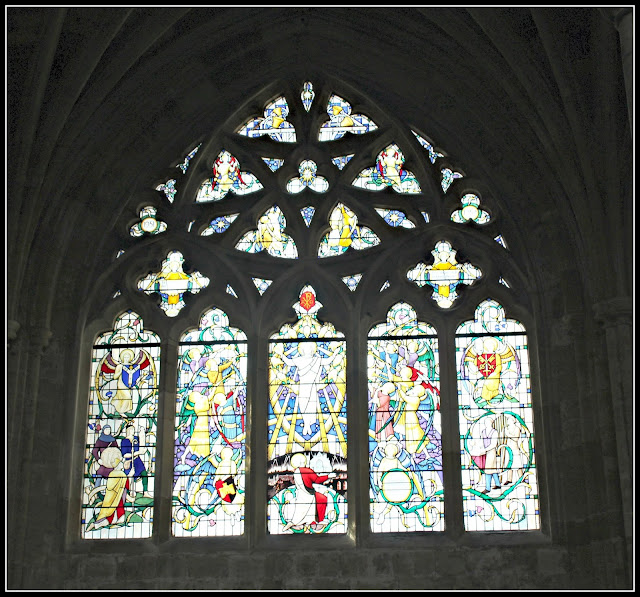 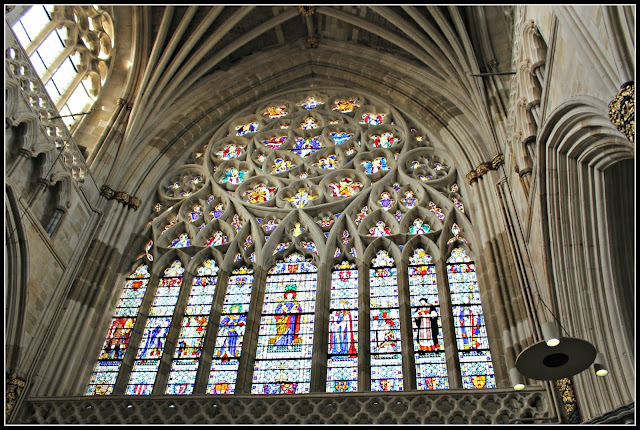 The Great West Window was created by William Peckitt of York in 1767.  It features the apostles and saints. 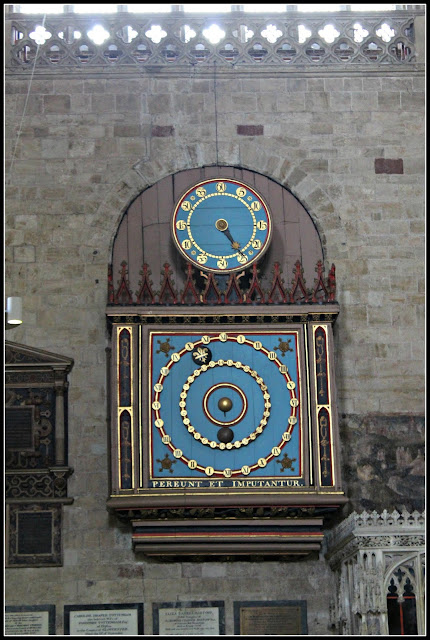 The Astronomical Clock dates from 1484.  This model is based on the understanding of the solar system of the day.  Such as the sun and moon circling around the earth in the center. 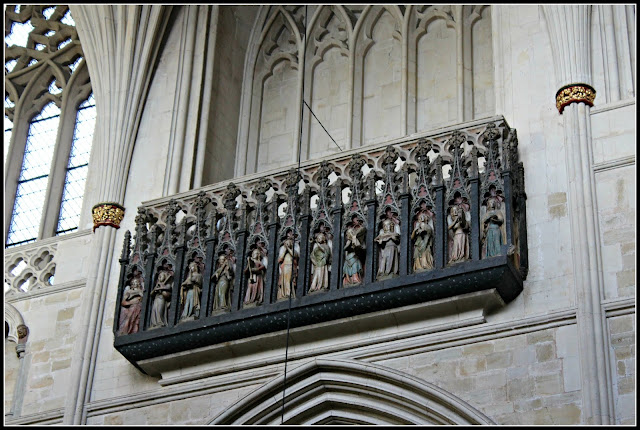 High on the north side of the nave is the Minstrel's Gallery.  The gallery was built in the 14th century and features carved angels playing musical instruments. 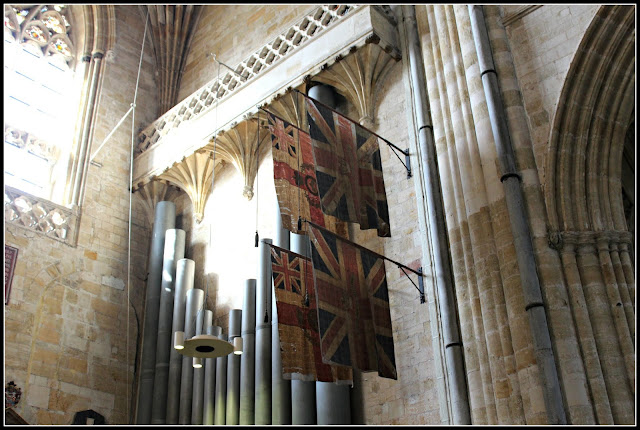 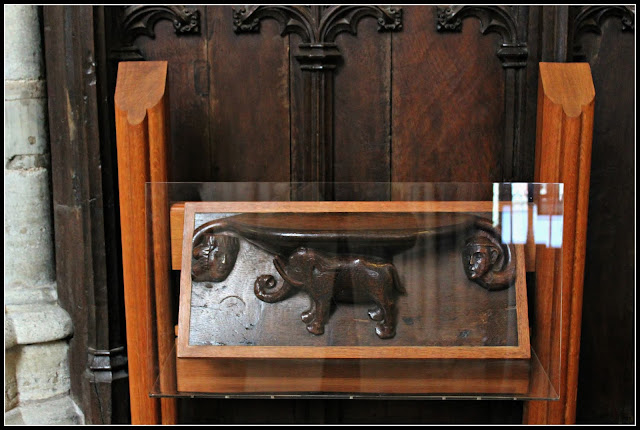 The misericord carving of the elephant is the only one on display in the cathedral.  It is one of the earliest involving an elephant.  These carvings are on the seats in the  nineteenth century choir stall.  The carvings are now being restored as they are separating from the seats.  They were originally carved in the thirteenth century and are one of the oldest surviving sets of misericord carvings in England. 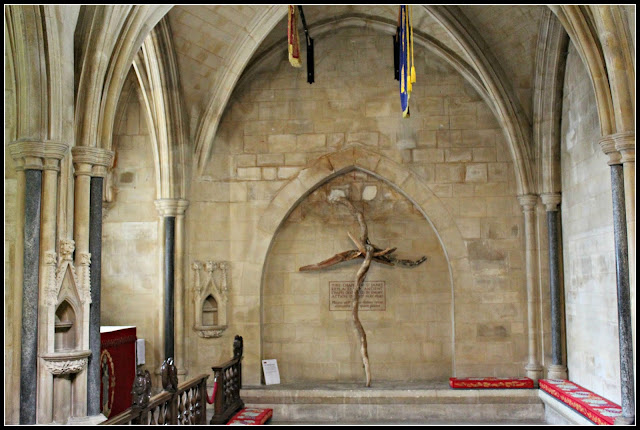 This is St James' Chapel after its reconstruction after WWII.  It has a more modern feel but with a nod to the past.  A large portion of the city of Exeter was destroyed during this bombing.  St James' Chapel was in ruin. 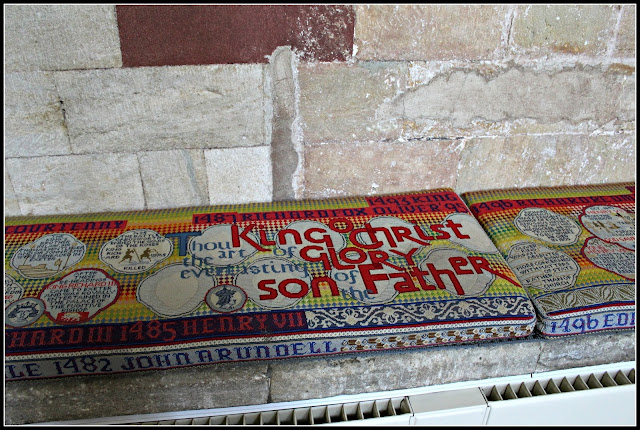 The Exeter Rondels were added to the Cathedral in 1989.  Marjorie Dyer and over 70 volunteers from the Company of Tapisers made the amazing covers for the cushions that line the nave of the cathedral.  The Exeter Rondels tell the story of the history of the magnificent cathedral in tapestry.  This is an amazing feat that shows the love this community has for their beloved cathedral. 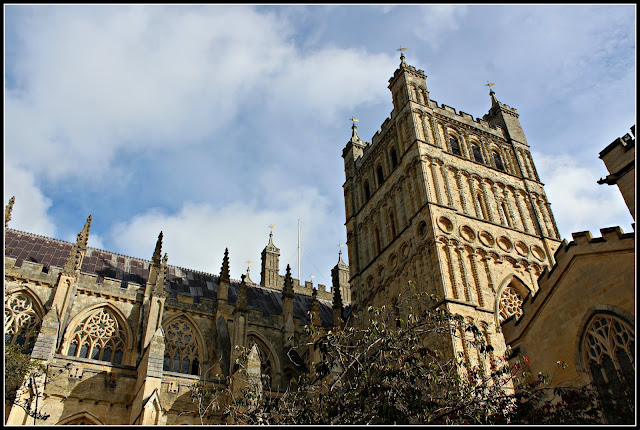 Exeter Cathedral is magnificent and reminds me of the Glory of God.  We feel honored to have experienced our time standing in that glory.

Posted by The Joy of Home with Martha Ellen at 5:04 PM