A Taste of London, Part One

Last year while perusing the Cunard catalog, I noticed an interesting trip that we have talked about taking "one day."  We have decided that "one day" should be soon as we are getting older ( if the good Lord is willing, older )  and take those trips while we are still able.  The Norwegian Fjords have always been on our bucket list.  We both looked at the trip and decided to book it for June of this year.  It was a perfect alignment of transportation there and back home.  As you know we have been to Great Britain a couple of times already on the Queen Mary 2.  Once you've taken her to cross the Atlantic, you never want to fly there again.  Yes, it takes time, but we are retired and have that! 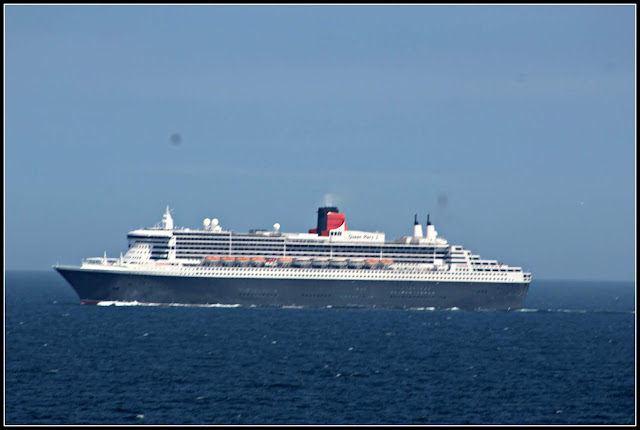 The above photo of the Queen Mary 2 was taken by Grayden on the Queen Victoria in the North Sea on our way to Norway. 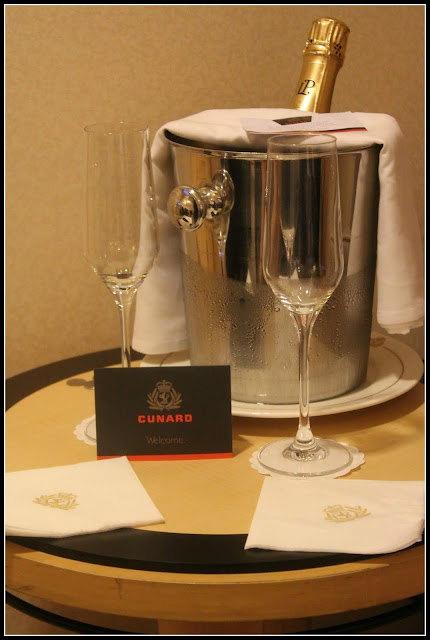 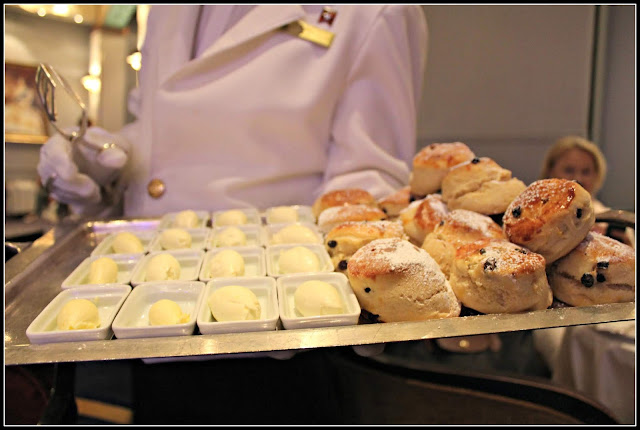 Would you like to go to Afternoon Tea?  Scones and clotted cream, tea sandwiches, and cakes are offered and of course tea or coffee if you are like Grayden. 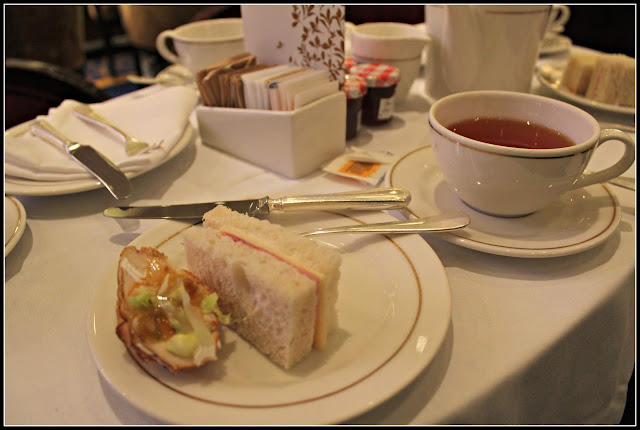 As I've written before about our crossings, there is much to do on the Queen Mary 2. You can attend interesting lectures and visit the on board planetarium.  Evening entertainment always follows dinner in the evening. 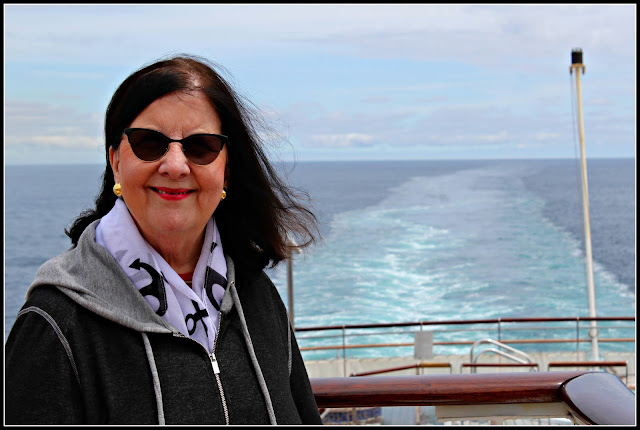 We love taking morning walks on the Promenade to get our two miles in.  There was a storm chasing us and one ahead of us the whole way, but the Atlantic was calm and beautiful!  As Captain Wells pointed out to us, the Queen Mary 2 is an ocean liner and built for ocean crossings.

After being spoiled for a week we arrive in Southampton, England.  We have a couple days before the Queen Victoria sails to Norway.  We decided to take a trip to visit London.  Of course, one could never see it all of London in a couple of days and we knew it!

Our coach transfer to London drops us off at Victoria Coach Station.  We looked at maps at home and notice that our hotel in Trafalgar Square is only a mile and a half from the station.  Silly us, decided we could walk there and take in the sights and sounds of London along the way!  Remember we had our luggage trailing behind us.  Two large roller bags and one small roller was packed for our 23 day journey.  We excitedly began walking our way to Trafalgar Square.

Grayden rolled the two large bags and I had the smaller one.  London was crowded with many folks as we began to get closer to Buckingham Palace.  The Royal Mews houses the state coaches, carriages, and horses.  Also the coachmen, chauffeurs, and groomsmen have apartments here.

Closer to Buckingham Palace the crowds around the Victoria Memorial was interesting pulling our cases.

As you can tell by the Union flag, Queen Elizabeth II is not in residence.  If she were in residence, the Royal Standard would be flying. 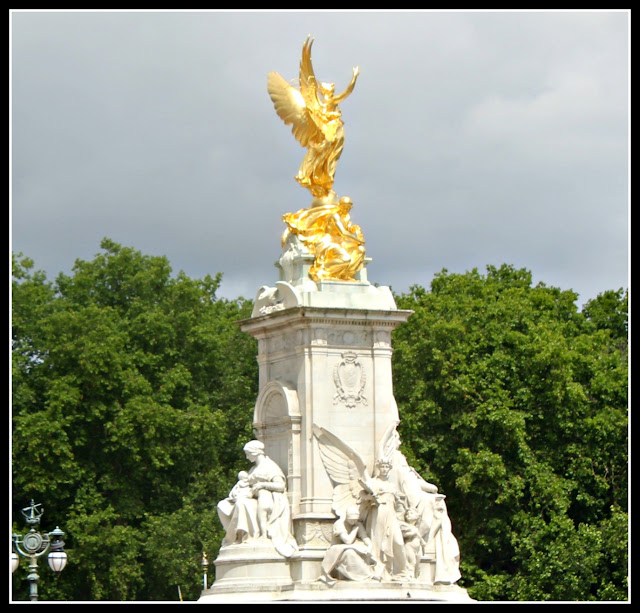 Did you know that Queen Victoria was the first monarch to live at Buckingham Palace?  The sculpture dedicated to her was designed by Sir Thomas Brock in 1901.  The statue of Victoria faces northeast toward The Mall. 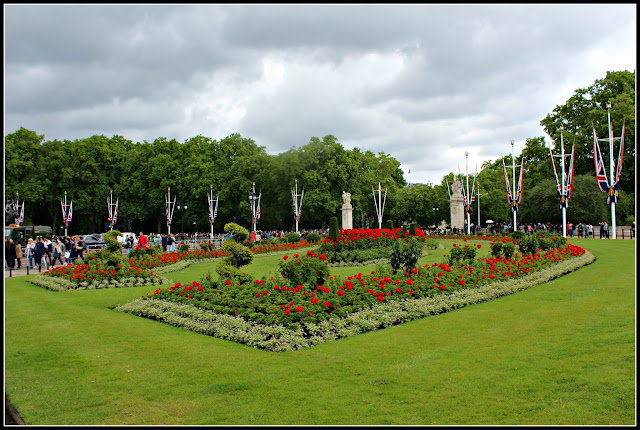 We continued our walk down the Pall Mall toward Trafalgar Square. 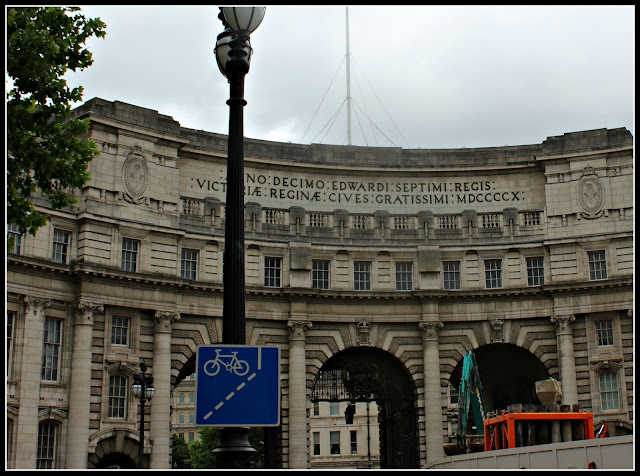 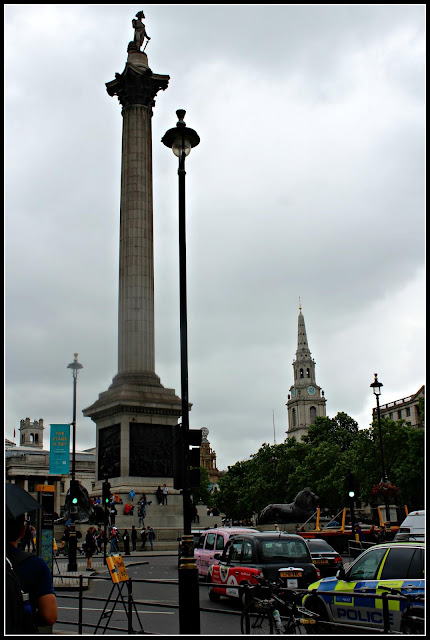 Walking through the Arch we see Nelson's Column in Trafalgar Square.  Admiral Horatio Nelson died at the Battle of Trafalgar in 1805.  Yes, the sky is looking quite threatening.  Rain is beginning to fall as we approach our hotel. 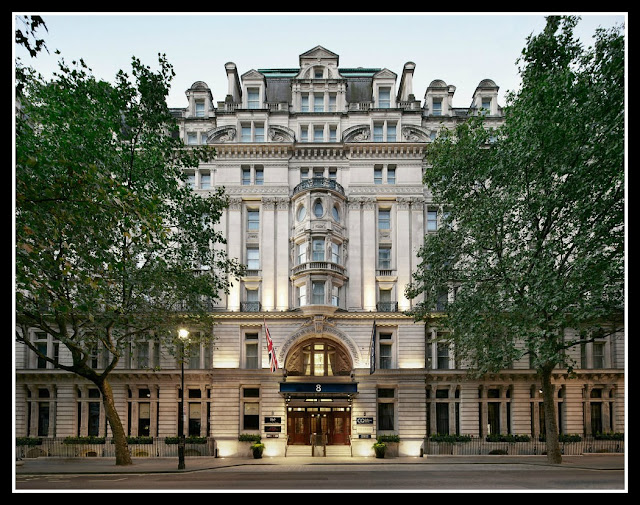 After placing our bags in our room we venture out for some lunch at the local pub that was recommended to us by the hotel. 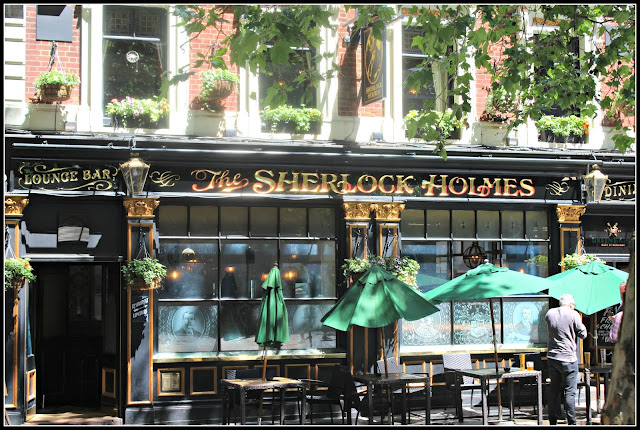 After a tasty lunch we ventured down to the Victoria Embankment to catch a ride down the Thames on the Clipper boat. 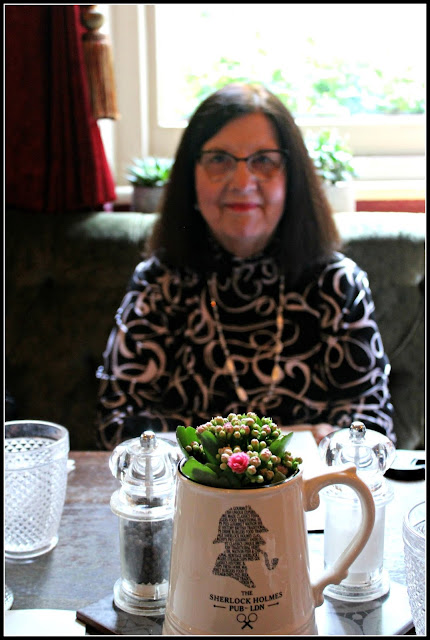 The boats on the Thames give a good overview of the city sights surrounding the river.  We had a short walk to buy our tickets and board the boat. 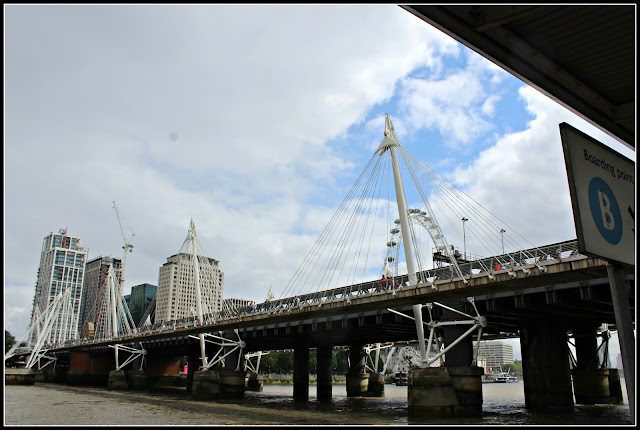 The tide must be high as the Thames is flowing quite swiftly. 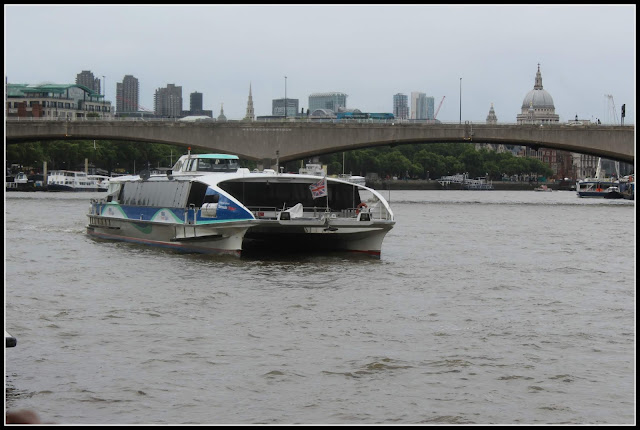 As you can see the rain is beginning.  The skyline in London is a study in contrast with the ancient and the new mingling together. 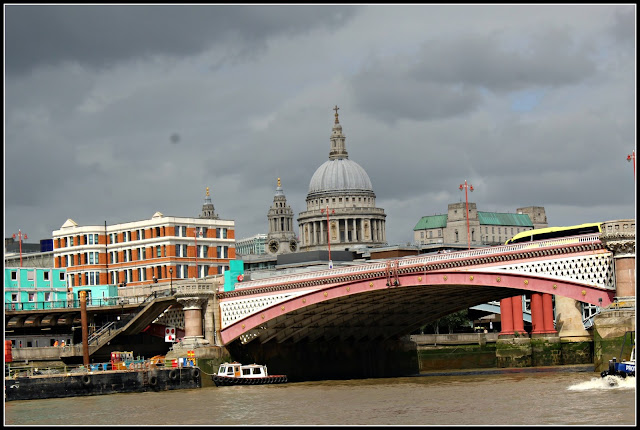 The dome of St. Paul's Cathedral rises above the skyline. 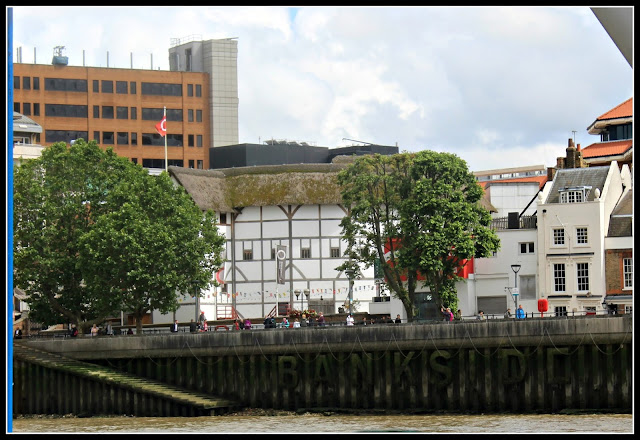 Shakespeare's Globe is on the south bank of the Thames. 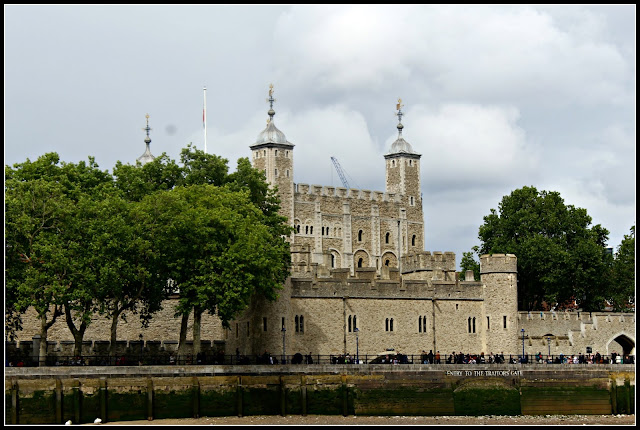 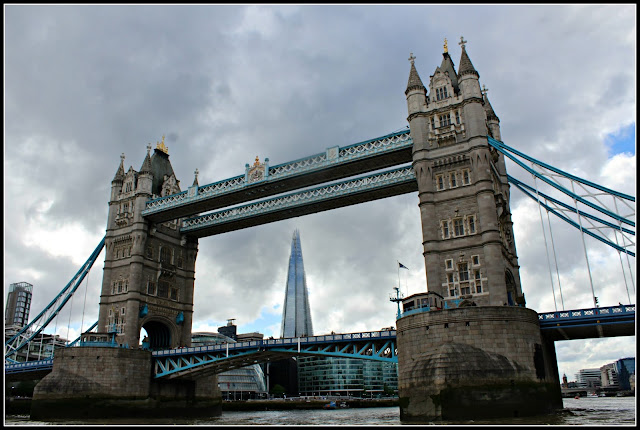 I'm excited as we pass under Tower Bridge.  Most folks refer to this as London Bridge, but it is not!  The skyline boasts the famous Shard in the center.  The Shard is the tallest building in the UK and stands at 1,016 feet. 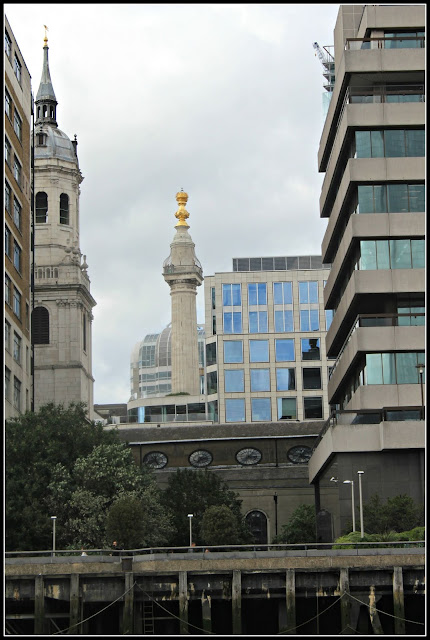 The gold topped monument above is a memorial to the Great Fire of London.  The monument was designed by Christopher Wren and Robert Hooke. 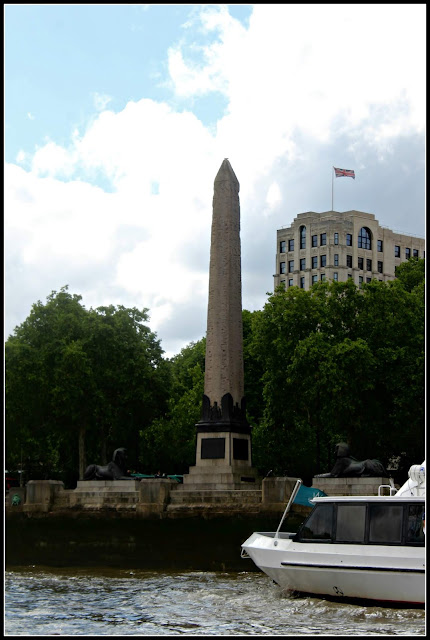 Cleopatra's Needle was a gift from the Egyptian ruler commemorating Lord Nelson's victory at the Battle of the Nile. 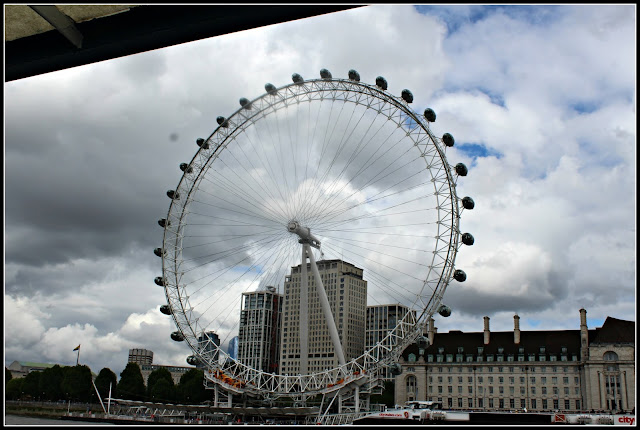 The London Eye has a large presence on the riverside.  It opened to celebrate the Millennium and used to be the world's tallest Ferris Wheel standing at 394 feet. 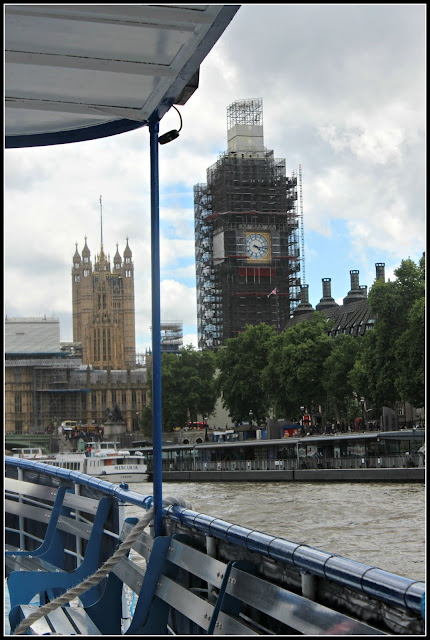 Big Ben and The Houses of Parliament are shrouded in scaffolding.  We were told that Big Ben (Clock Tower) was leaning and I'm certainly glad its foundation is being repaired!  We also learned its official name now is The Elizabeth Tower, marking  Queen Elizabeth II's Diamond Jubilee in 2012. 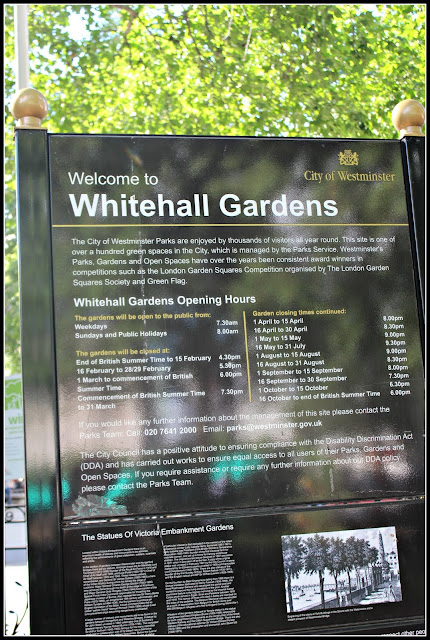 Getting off the boat at Victoria Embankment we walked back to our hotel stopping in Whitehall Gardens along the way.

Grayden and I both enjoyed seeing the lovely trees and shrubs in this unique garden. 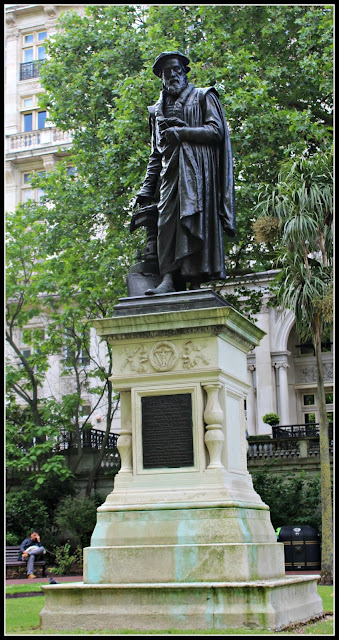 One statue caught our attention of William Tyndale.  I'm sure you are familiar with him translating the New Testament to English. 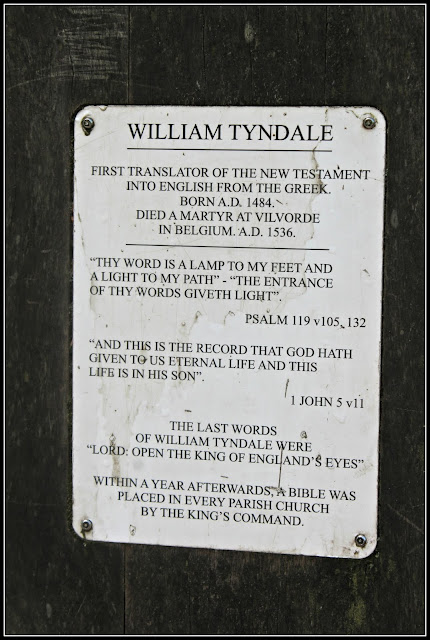 His last words are recorded on this sign.  The Lord answered his prayers as you can see what happened a year later after his execution. 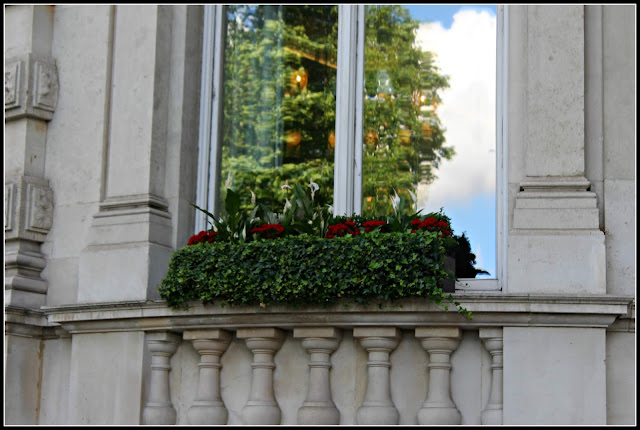 As we headed back to our hotel, we were tired and ready to go to bed.  We have a full day planned up next, so I hope you will join us as we continue to get a taste of London.


Posted by The Joy of Home with Martha Ellen at 3:15 PM