The Tale of the Zucchini


In the kingdom of love and joy,  the king and the queen decided that they needed to start their walking again.  Alas, the weather in the land was hot and humid.  Too hot for the queen as she is not fond of walking when the steam is rising from the street.

The king suggested that they go over to the Royal Mall and walk in the comfort of air conditioning.  The queen thought this to be a lovely idea so she laced up her royal walking shoes and off they went to the Royal Mall.

Walking around the Royal Mall, trying not to draw attention to their subjects,  a young woman and three adorable boys approached them.  The young woman said she was from the Royal Agriculture Department.  She corrected herself and then admitted that she and her family had been on vacation and wondered if we wanted a zucchini from her garden.  She pulled it out of her bag and low and behold it was a giant zucchini.  The king looked at the queen and asked what she thought.  The queen looked at the children's faces and said of course we would love the giant zucchini.  You see the queen has a soft spot for children and didn't want to turn those adorable boys down.  The mother handed the zucchini over to the king.  As the children walked away the smallest boy said---"Thank you, now we don't have to eat it!"

The king looked rather interesting walking around the Royal Mall with a zucchini.  The queen arranged to have a royal bag for the giant zucchini.  The king was now able to finish the walk with the queen.

As the king and queen were travelling home in their royal coach, the king asked the queen what in the world was she going to do with this giant zucchini?  The queen was worried along with him about this issue.  Probably the queen would find it to be hollow or rotten inside.

The king loves chocolate and the queen figured she must make a chocolate zucchini bread.  Here is the king with the giant zucchini in the royal kitchen. 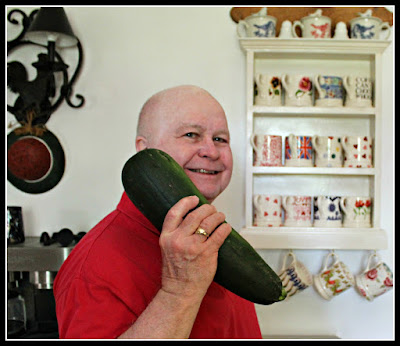 The queen still wondered what the zucchini would look like when she went to cut it open. 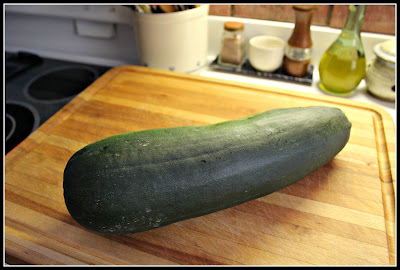 The zucchini turned out to be fine.  So the queen made some fine chocolate zucchini bread. 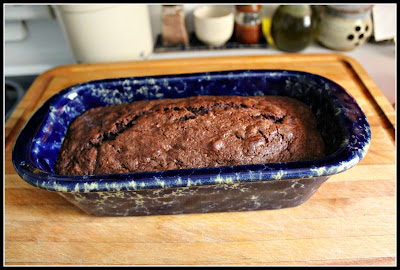 It makes two loaves of really moist delicous bread fit for a king and a queen! 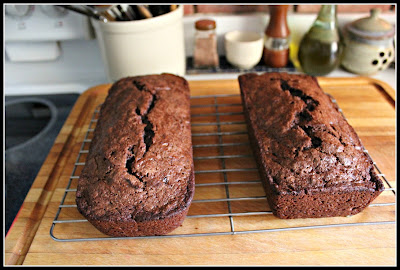 PS --The queen has enough zucchini for the whole kingdom.


Posted by The Joy of Home with Martha Ellen at 4:47 PM