Today we are traveling to visit the home of Rudyard Kipling.  Bateman's is a lovely Jacobean Wealden sandstone home built in 1634.  It is located in Burwash, East Sussex.  Kipling was an English short story writer, poet, and novelist.  You may know him best for The Jungle Book or Kim.

After parking the car in the car park we find we are a little early for the opening of Bateman's so let's look around at the lovely garden and grounds. 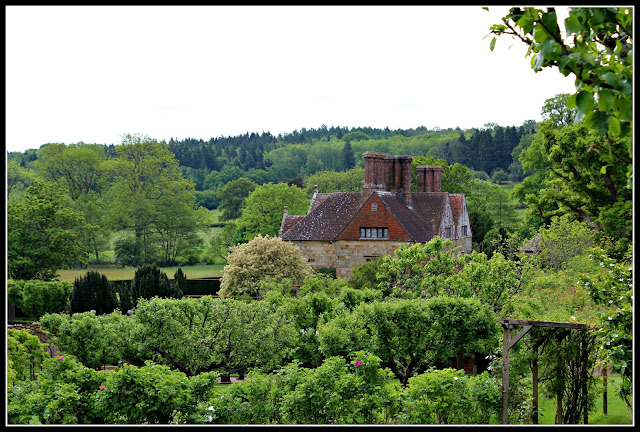 There is a large vegetable garden that is just beautiful. 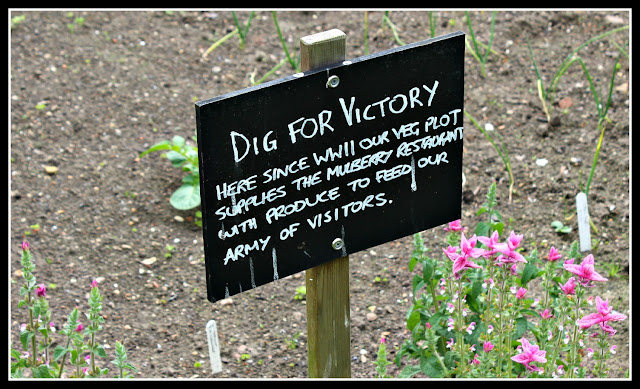 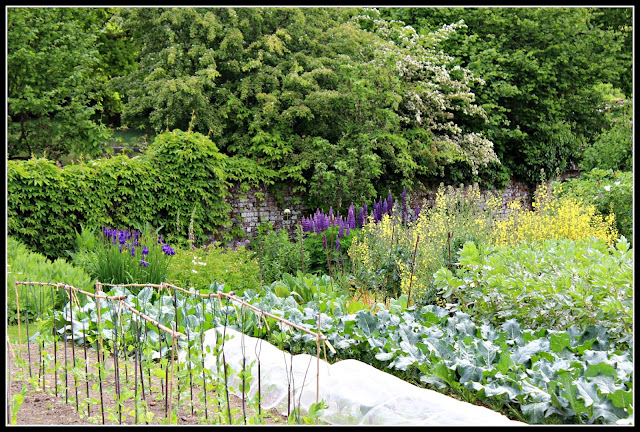 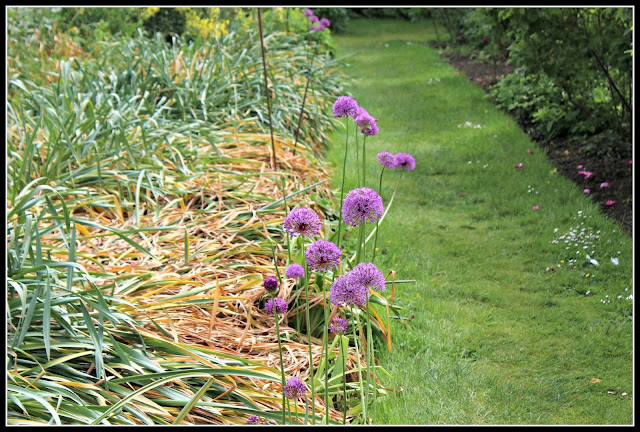 I was thrilled to see another English Robin on this trellis.  He was not afraid of humans!  His song was so lovely. 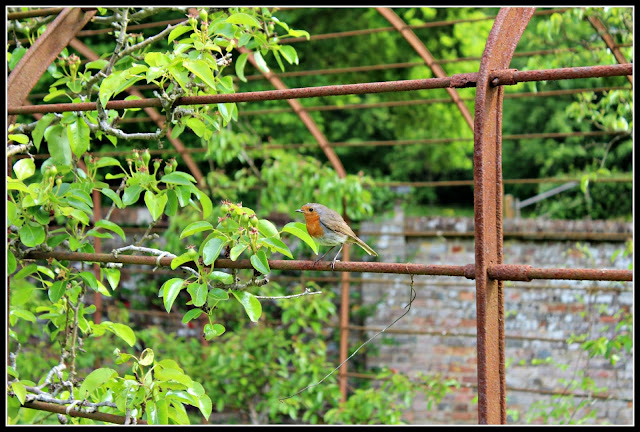 I was so happy to see this beautiful espaliered red rose on this weathered wall. 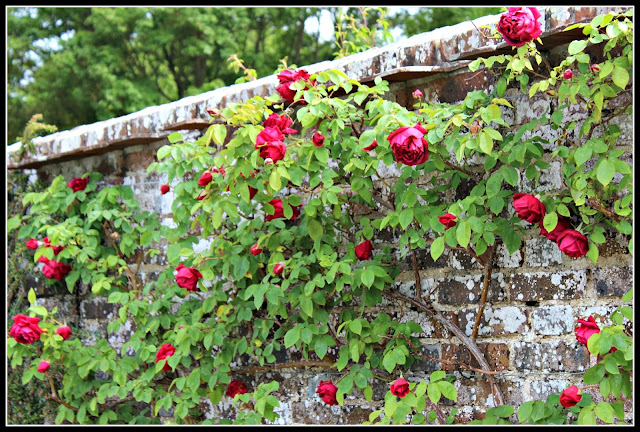 The grounds are simply beautiful on this gorgeous morning.  I've mentioned my love hate relationship with wisteria.  I guess I need to figure out a way to make mine look like this on our home!  It is breathtakingly beautiful!! 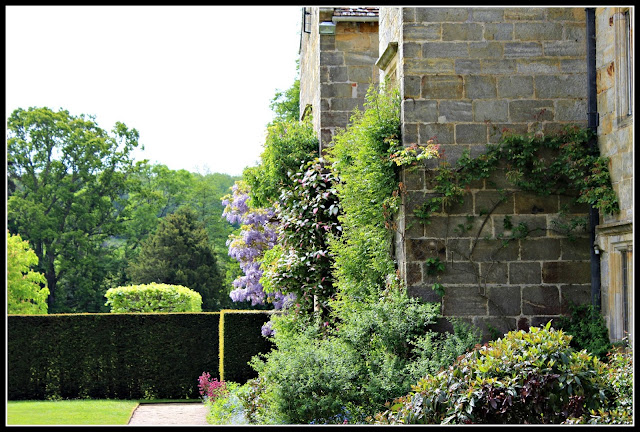 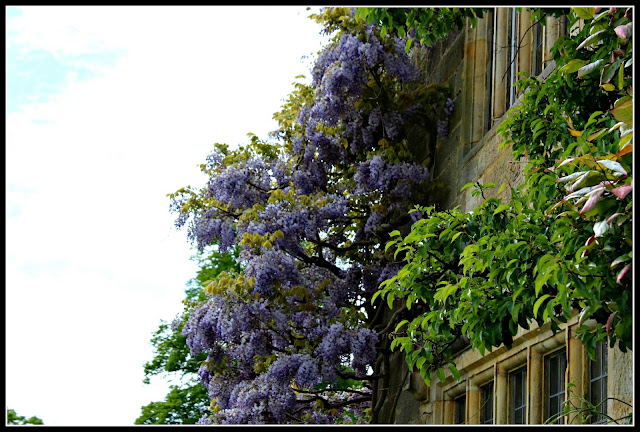 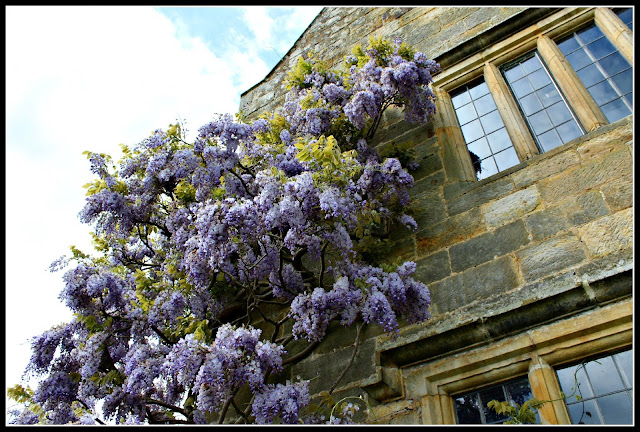 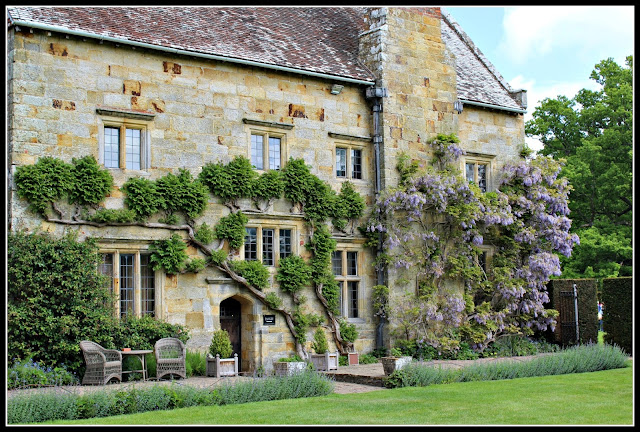 I am in love with this lovely home and we haven't entered yet.  Let's go around front and see if we can go in now.  But first look at these beautiful grounds. 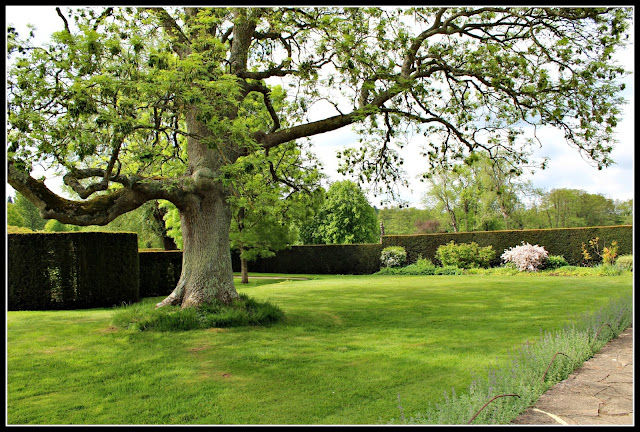 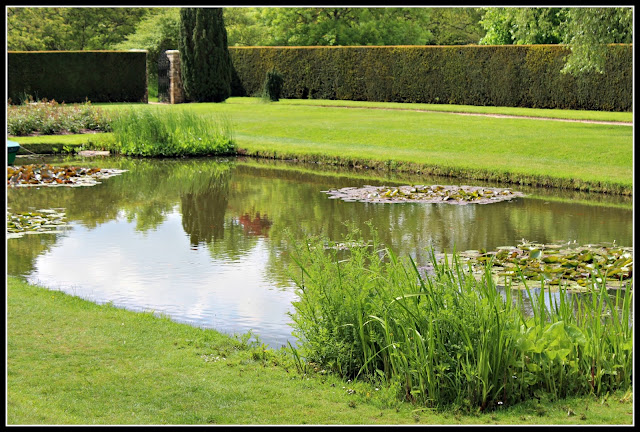 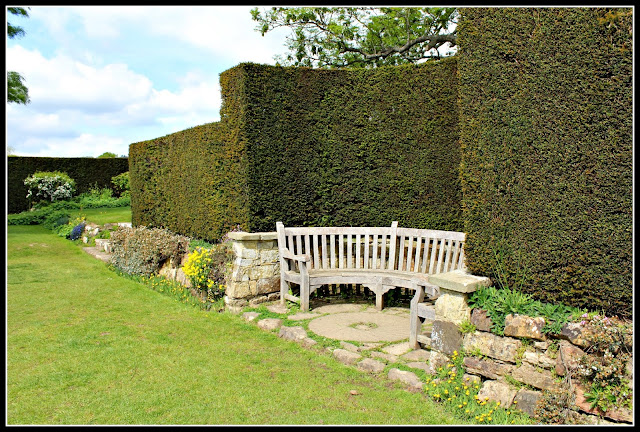 They are ready for us to go in.  Upon seeing Bateman's Kipling said-- "Behold us, lawful owners of a grey stone lichened house—A.D. 1634 over the door—beamed, panelled, with old oak staircase, and all untouched and unfaked. It is a good and peaceable place. We have loved it ever since our first sight of it." (from a November 1902 letter) 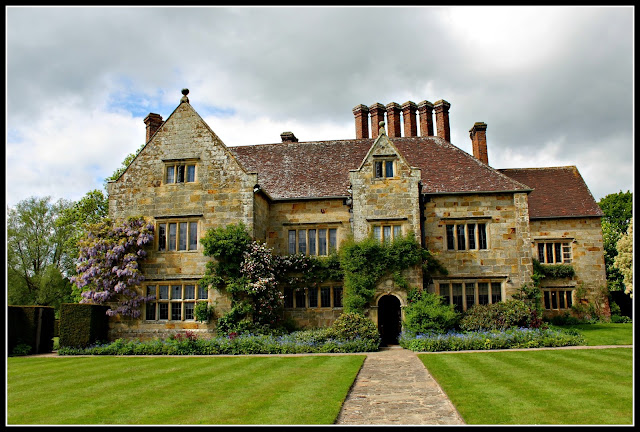 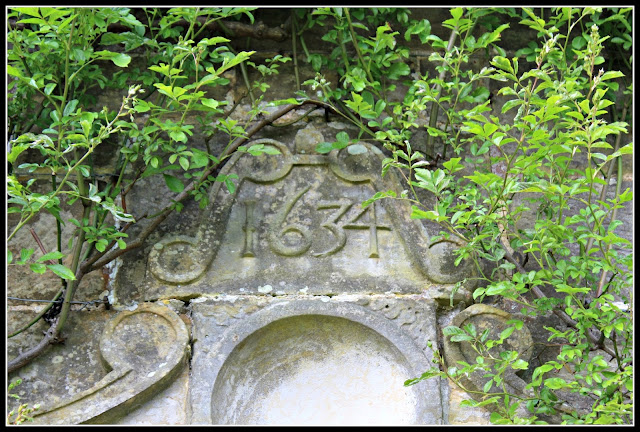 Rudyard Kipling and his wife lived here from 1902 until his death in 1936 and upon her death in 1939 she gave the home and it's belongings to the National Trust.  The interior is filled with their belongings just as they left them.
Kipling was born in 1865 in Bombay, India.  He was educated in England but then returned to India in 1882.  In 1892 he married, American born, Caroline Balestier.  They made their home in Brattleboro, Vermont.  While living there he wrote The Jungle Book and Gunga Din.  Rudyard Kipling was the highest paid writer in the world at the time.  He received the Nobel Prize for Literature in 1907.  His ashes are buried at  Poets' Corner, part of the South Transept of Westminster Abbey, next to the graves of Charles Dickens and Thomas Hardy.

It's a little dark inside, so let your eyes adjust as we begin. 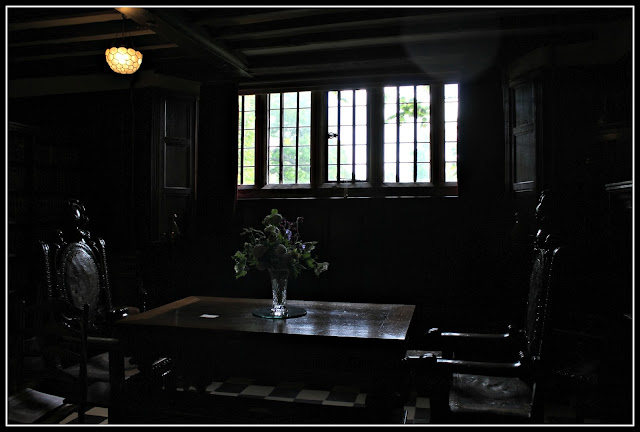 The wallpaper in this room is so lovely. 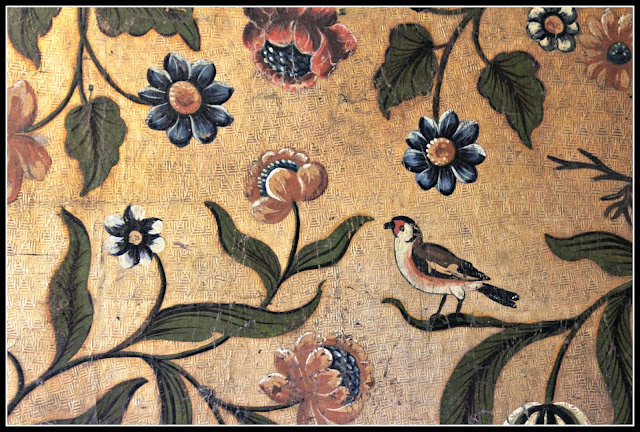 The woodwork and panelling was made from the oaks on the property in the 16th century.  It is lovely beyond words!  There is a treasure trove of books at Bateman's as one might imagine. 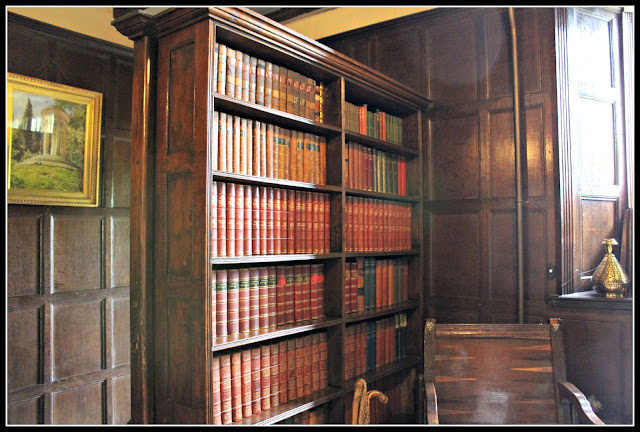 I loved this sweet little miss in the rocker.  She is wearing a new dress as her old one was thread bare. 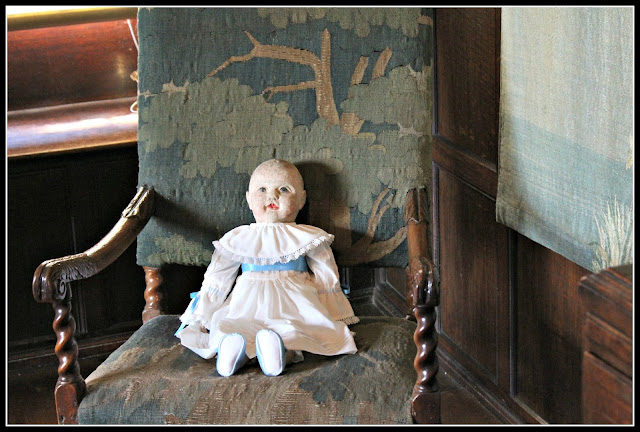 There is lovely porcelain in several handsome secretaries. 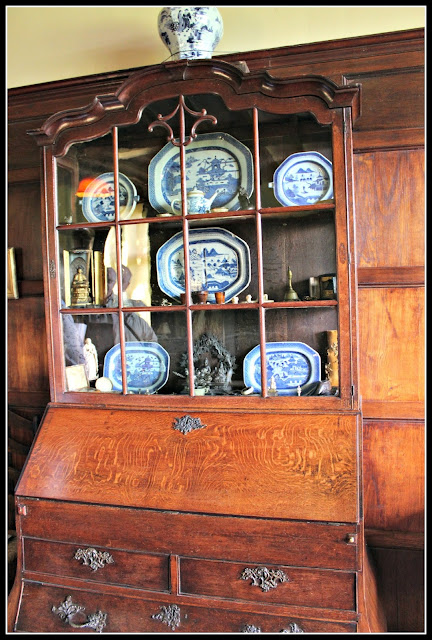 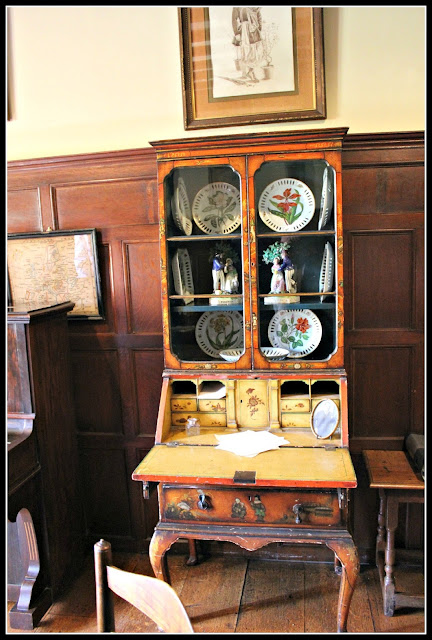 Here is portrait of Rudyard Kipling that you may be familiar with.


After climbing the stairs we enter Kipling's study.  It is beautiful with the overfull bookcases and a large window to write by. 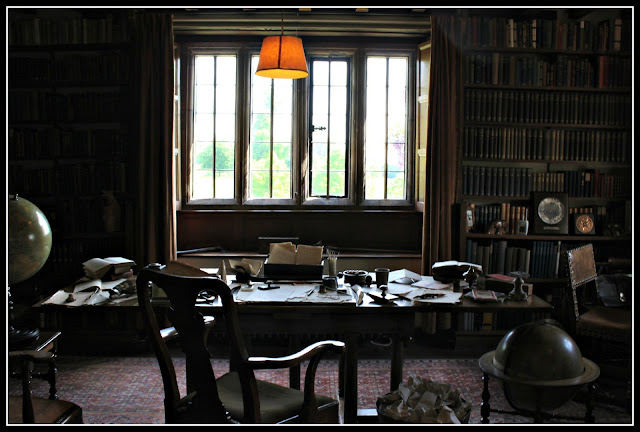 There were balled up pieces of drafts all over the floor as Kipling was known to do. 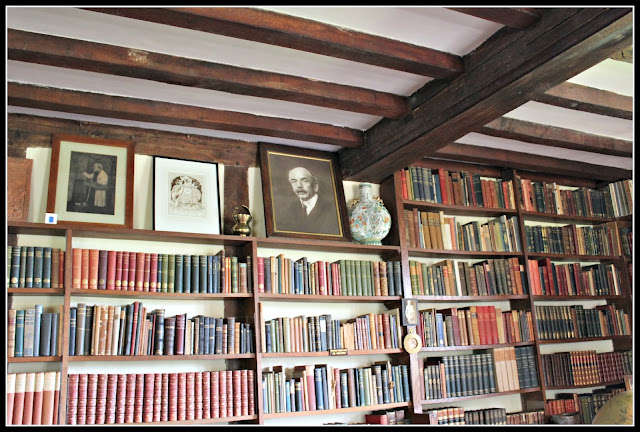 There were cases with sketches of all of his books and his writings.  Here is an article about the Kipling's home in Vermont.  You can stay at Naulakha.  Check out the site Here 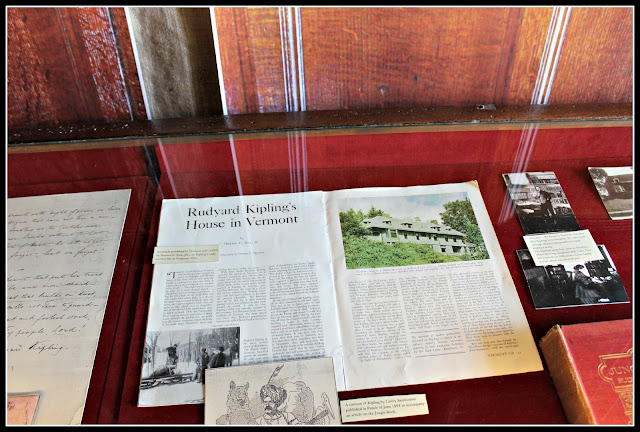 Next up was the Kipling bedroom that featured this gorgeous canopy bed, dressed in lovely embroidered bed coverings. 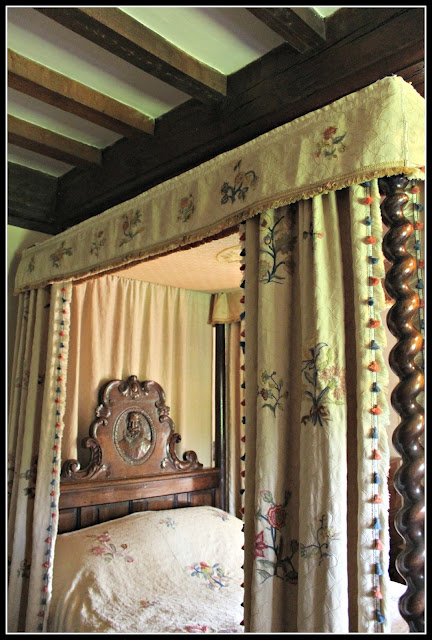 Mr. Kipling was a sharp dresser.  Check out the morning coat. 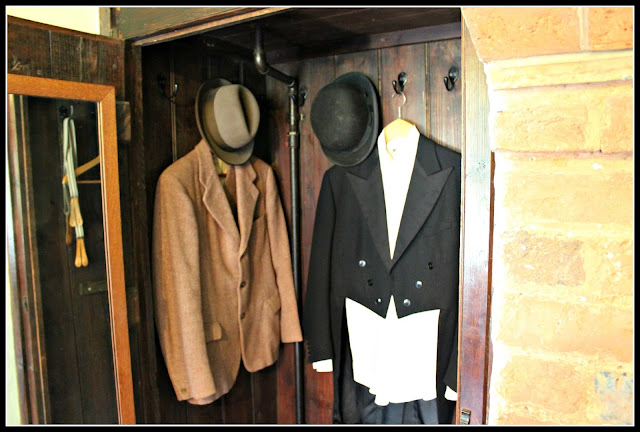 This was his son's bedroom.  He left it as it was since John was killed in the First World War in 1915 at the Battle of Loos.  Rudyard Kipling became involved in the Commonwealth War Graves Commission after the death of his son and wrote the poem "My Boy Jack" during this time. 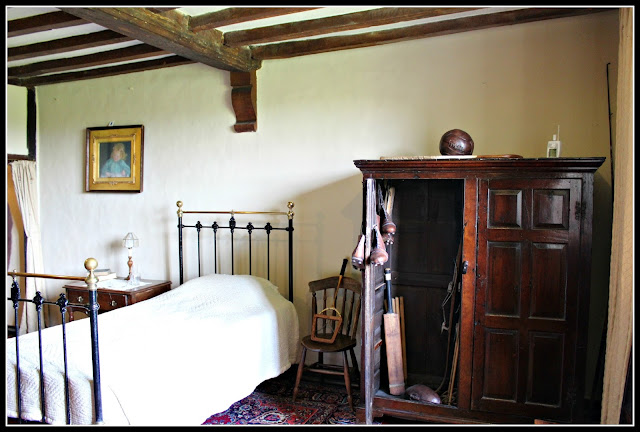 We now are going downstairs to view the kitchen.  Look at that charming stove! 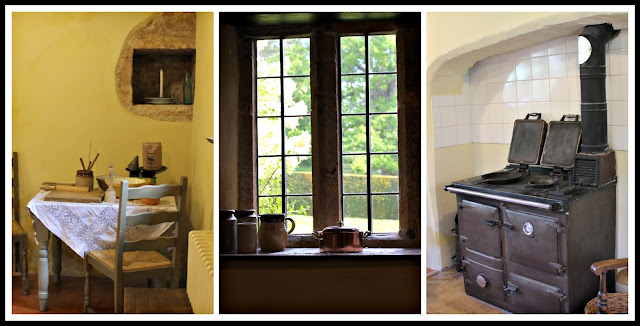 Bateman's was a lovely surprising home for us to visit.  I hope you enjoyed it as much as I enjoyed sharing it with you! ♥

Posted by The Joy of Home with Martha Ellen at 10:49 PM