We were in Arizona for our anniversary last October and I wanted to continue with our trip.  If you want to read more about the beginning of our trip you can go HERE  and HERE

Most of our travels go pretty much as we have planned.  Our plans were to go see the Tonto Natural Bridge.  It was a very HOT day as we began our trip through the Tonto National Forest.  The Tonto National Forest is almost 3 million acres that has a variety of vegetation because of the range in altitude changes from 1,300 ft to 7,900 feet.  We were traveling through this beautiful area as the temperature was hovering around 100 degrees. 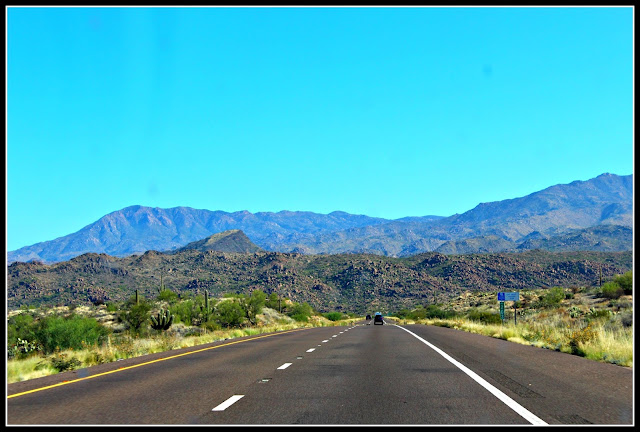 We made sure we had our water with us along with a few snacks.  The GPS was directing us to our destination for the day.  The desert changes quite quickly as we travel along the road. 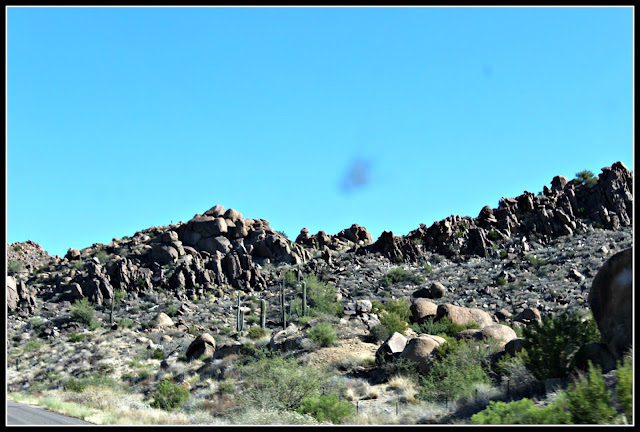 Tonto National Forest borders on the south, Phoenix, and the Mogollon Rim to the north and the San Carlos and Fort Apache Indian reservations are to the east. 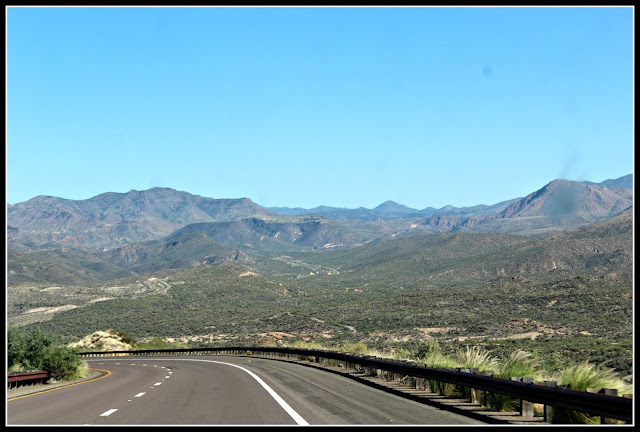 At about this point Grayden says--"Oh no, we did not get gas!"  Oh, I say we'll see a gas station soon.  Grayden checks the GPS and learns we have 49 miles before there is a gas station.  Oh MY!  At this point we see that we have about an eighth of a tank of gas.  We are driving a very small vehicle that we are hoping gets good gas mileage! 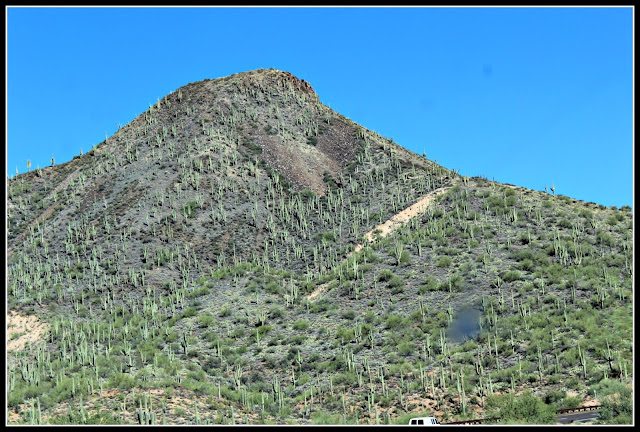 As beautiful this drive was we were both worried!!  Grayden was trying to conserve gas as well as he could by going slower and coasting down the mountains!  The gas warning light was on and the booklet about the car had no information on how much gas remained after the warning light came on! 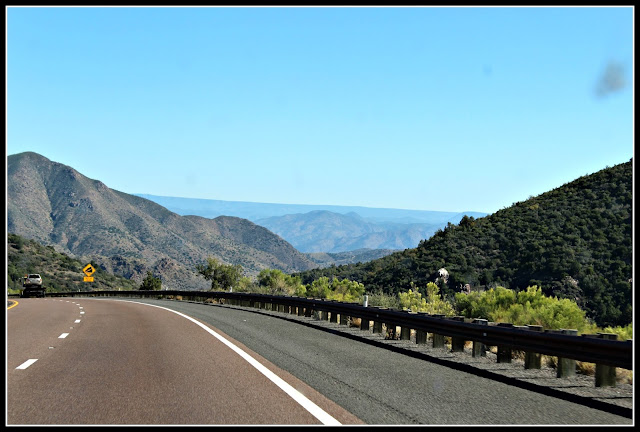 We both are feeling pretty foolish.  This is a desolate road and with it being so hot I was so worried!  We coasted into the first service station in Payson!  Our prayers were answered!  We were so relieved! 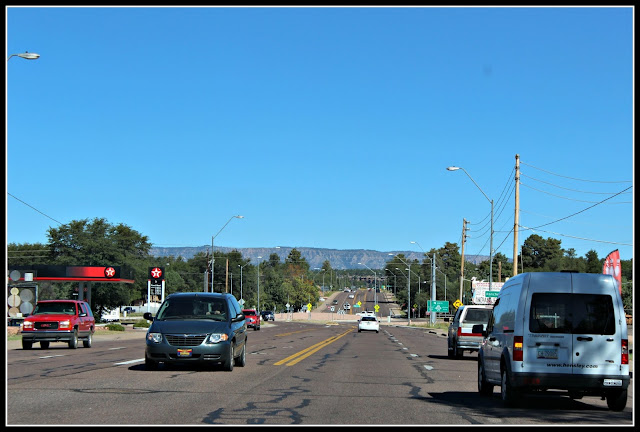 We could now breathe a little easier and we definitely learned our lesson to not allow our brains to be on vacation! 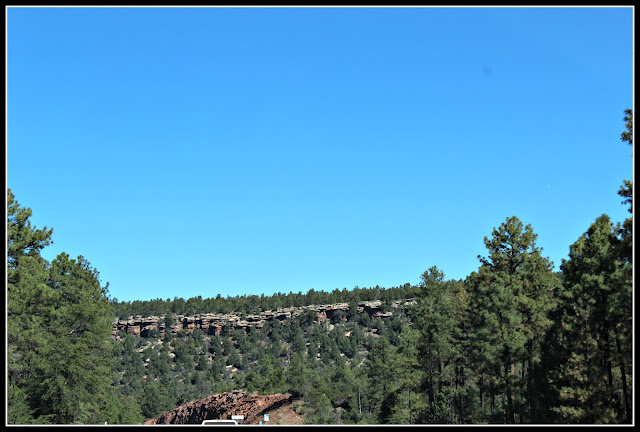 The air is much cooler now and filled with the wonderful fragrance of pine as we travel to Tonto Natural Bridge. 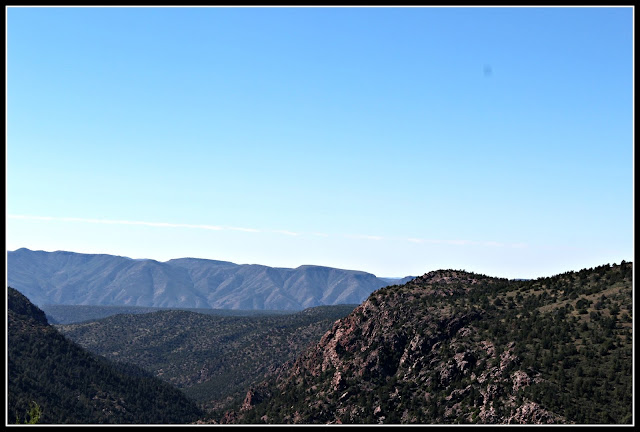 The drive had beautiful views with roads winding and twists and turns.  In the valley of pine trees is the Tonto Natural Bridge State Park.  The Natural Bridge is thought to be the largest travertine bridge in the world.  Apparently David Gowan, a prospector, came upon the bridge as he was chased by Apaches.  He hid there for two nights in a cave.  He then laid squatter's rights to the land and invited his nephew, David Gowan Goodfellow, to bring his family over from Scotland. 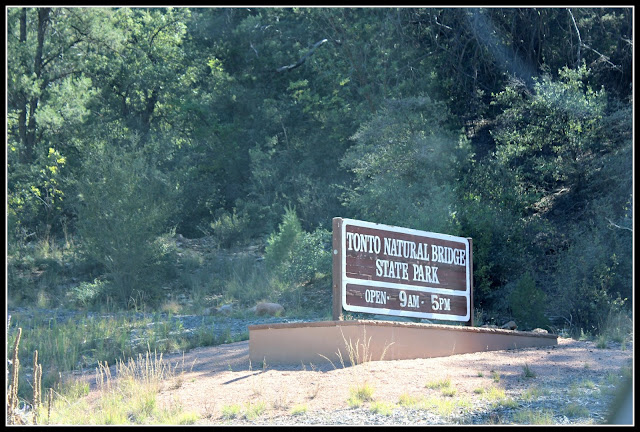 Driving up to the Park we go into this house to pay for our entrance. 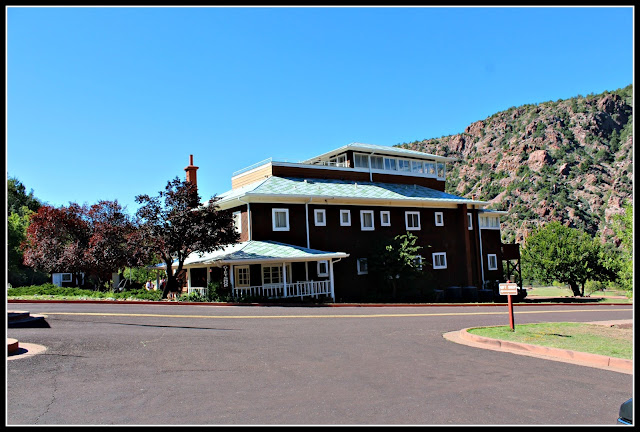 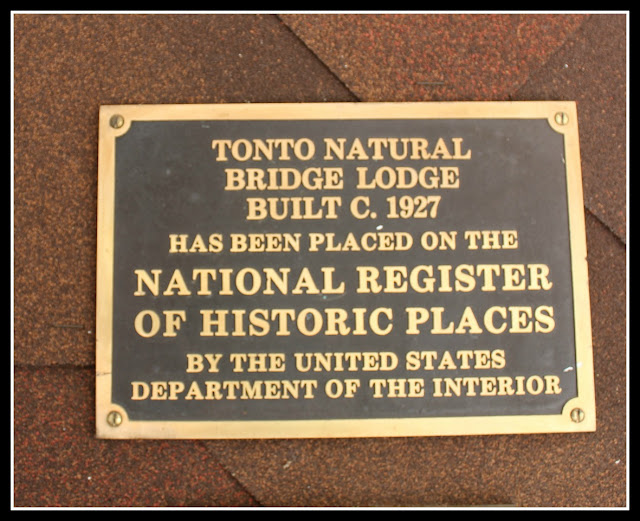 It was a charming old lodge that had the most interesting interior. 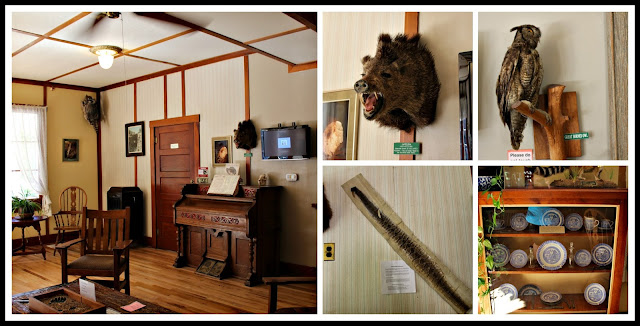 We then walked outside and drove to the parking lot to view the Tonto Natural Bridge.  The only natural bridge that we had seen is in Virginia.  That bridge we look up to view its beauty. You can go HERE  to learn more. This bridge was a little different as the top of the bridge is ground level that includes walking paths and picnic tables.  You can hike down below to view the bridge and you can also walk to four overlooks to look down into the natural bridge. 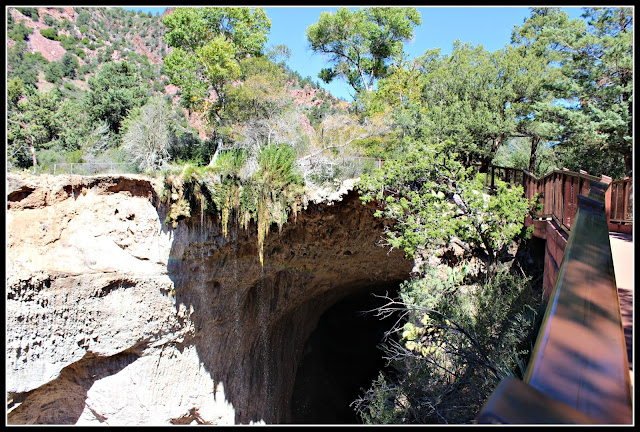 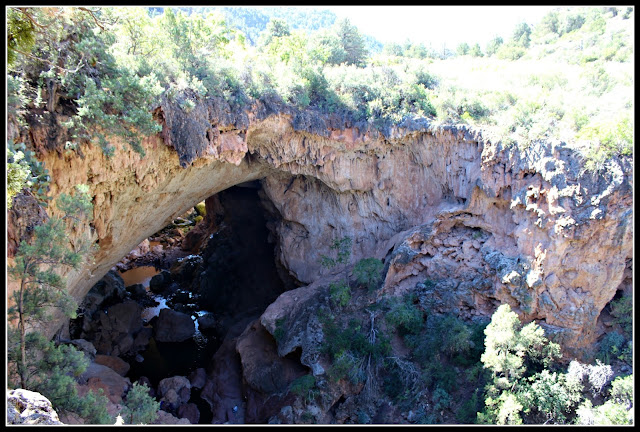 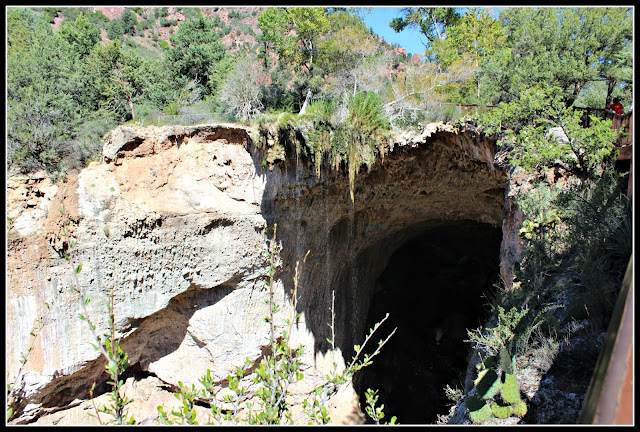 If you look at the photo below you will see the walkway at the top right.  This gives you a perspective of how large this cave is. 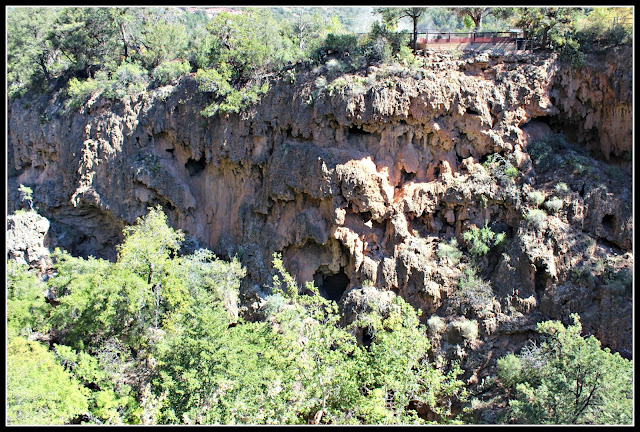 After visiting the Tonto Natural Bridge we drove back to Payson and had lunch at another wonderful Mexican restaurant.  After lunch we drove to the Tonto National Monument.  Driving there we went through the most lovely Tonto Basin area. 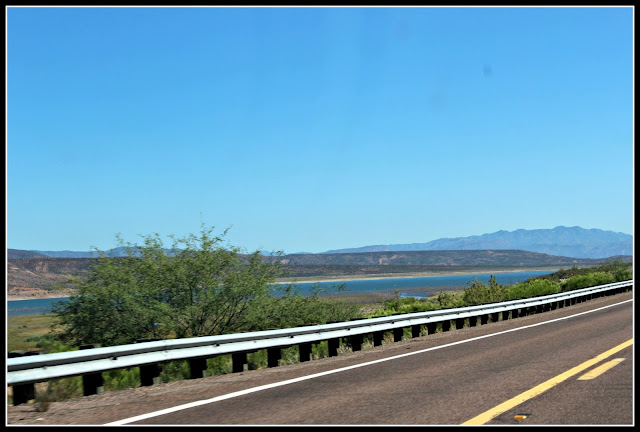 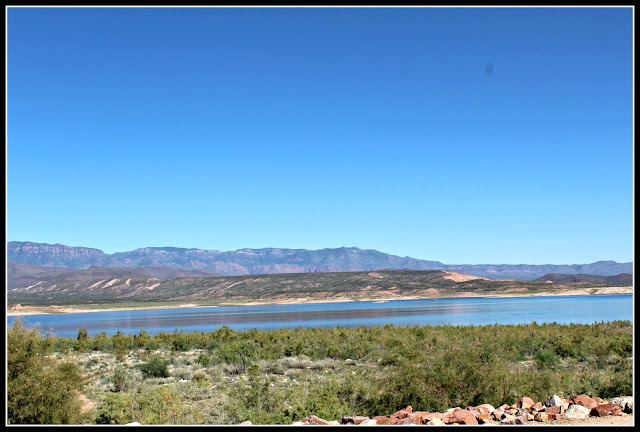 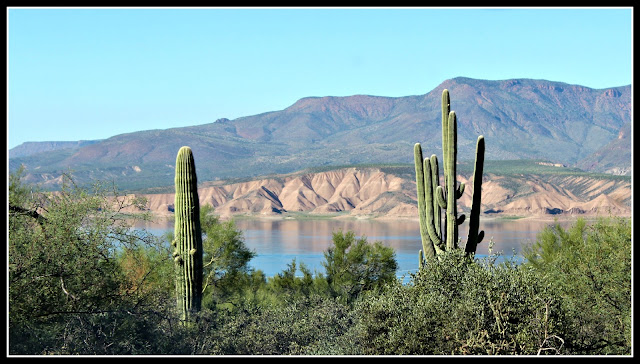 The beauty of this area is a study in contrast!  The Salt River was erratic with frequent flooding so between 1905 and 1911 The Theodore Roosevelt Dam was constructed to harness the water for irrigation of the desert.  Now the land could be farmed. 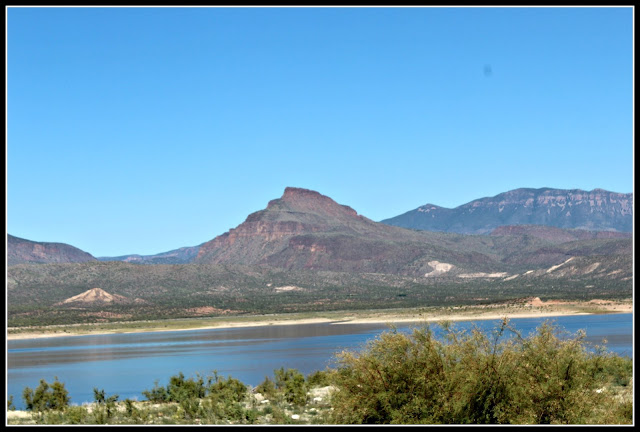 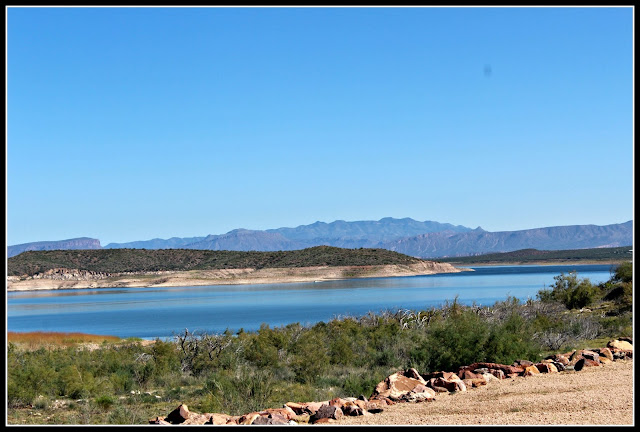 Tonto National Monument is just around the bend.  The views are breathtaking. 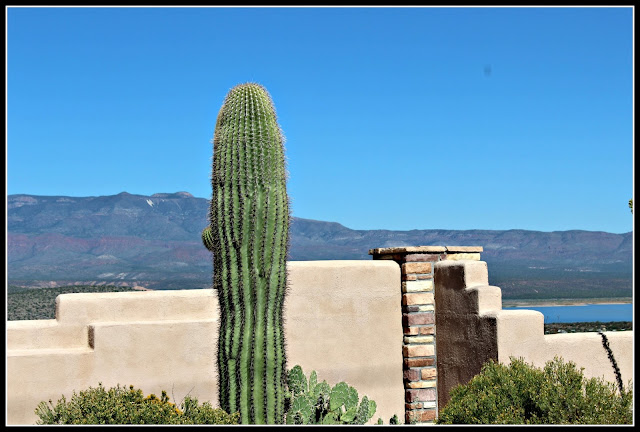 The Tonto National Monument are two of hundreds of once thriving communities in the Tonto Basin.  They lived in the cliffs for protection from the elements and the erratic river below.  The shallow cave dwellings into the side of the mountain is nearly 700 years old.  Lying between the northern Colorado Plateau and the southern Sonoran Desert, Tonto Basin is one of many valleys and basins with evidence of early farming activity. 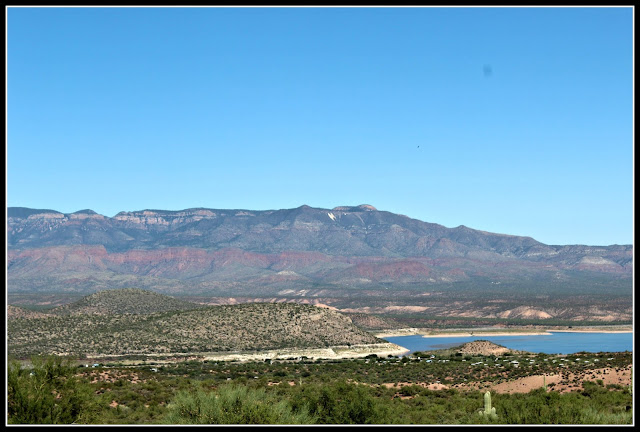 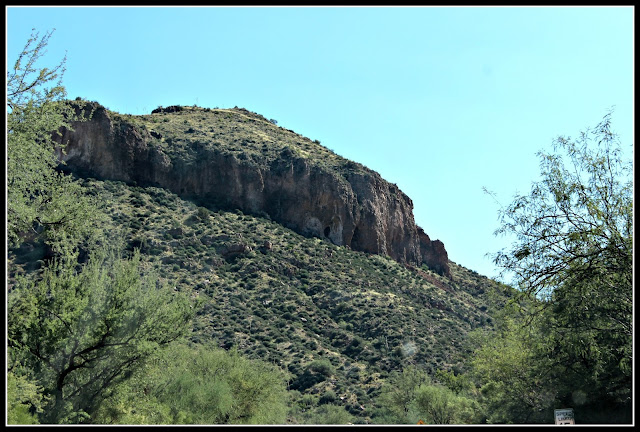 If you look closely you can see the cliff dwelling. 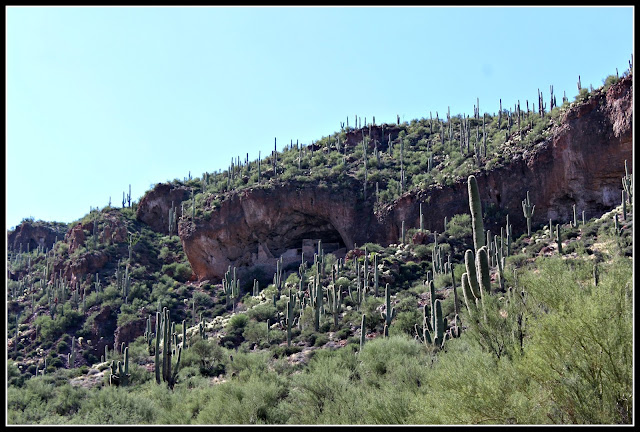 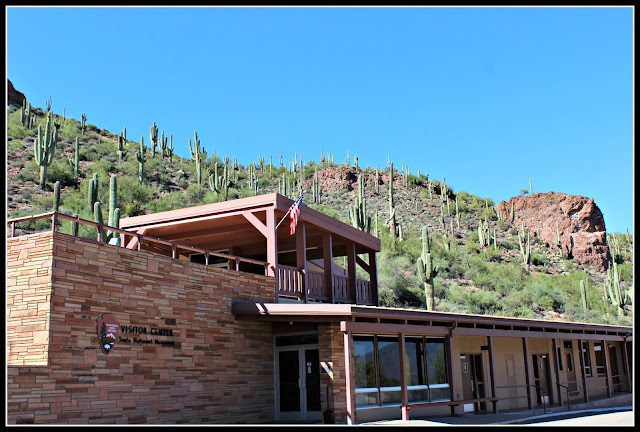 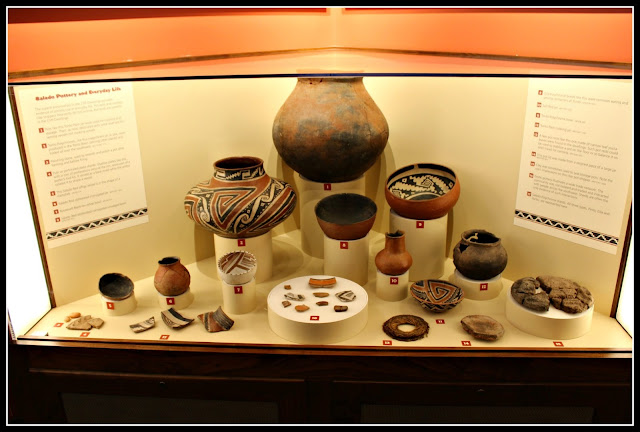 This was a old photo from the late 1800's of a couple who took up residence in the cliff dwelling. 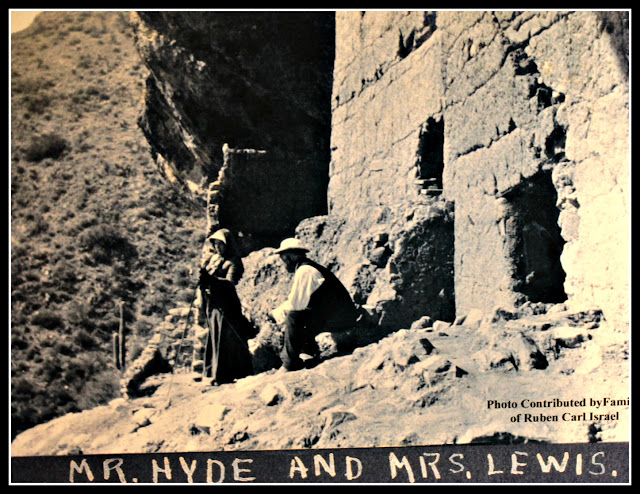 The views as we left the National Monument left us with a feeling of why 700 years ago ancient people made this their home.  The Tonto Basin area certainly gave us a feeling of coolness on this very warm day. 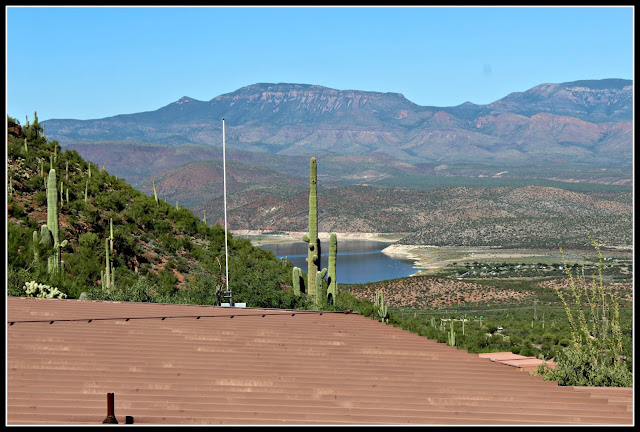 Posted by The Joy of Home with Martha Ellen at 7:22 PM