Costa Rica from My Balcony

In my last post I shared that I tested positive for Covid while onboard the Queen Elizabeth voyage.  During my 10 day isolation I filled my days with many things.  The first thing I had to come to grips with was not being with Grayden.  I was so thankful that we could chat whenever we wished using the internal phone in each of our staterooms. 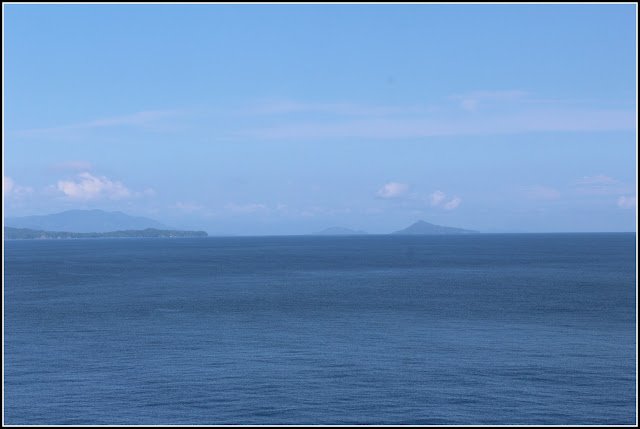 Every day at home Grayden and I enjoy little moments when we connect with each other.  We always observe Elevenses and Afternoon Tea.  It's usually nothing fancy, just a cup of tea for me and coffee for Grayden.  We usually have a square of dark chocolate for Elevenses and maybe some strawberries for Afternoon Tea along with our drinks.  So Grayden decided we would still keep up this tradition, though we were separated.  At 11am each morning he called me and we would talk and enjoy Elevenses.  Grayden had chocolate from the daily turndown each evening.  I would save some cheese from breakfast.  We toasted each other and kept our tradition and our sanity!  The same thing was practiced for Afternoon Tea.  Though we couldn't go to the Queen's Room, we did talk at 3pm and shared some nuts or cheese left from our lunch tray. 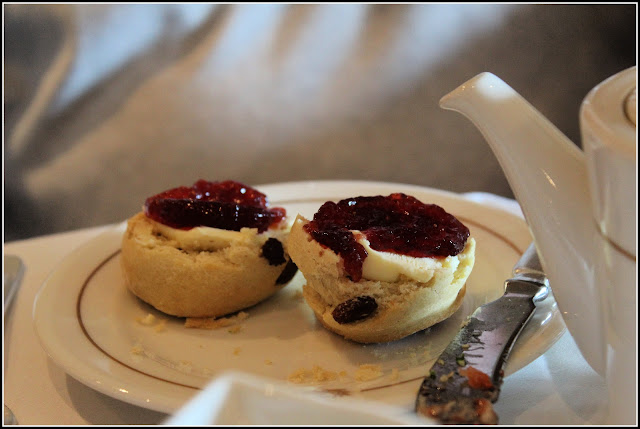 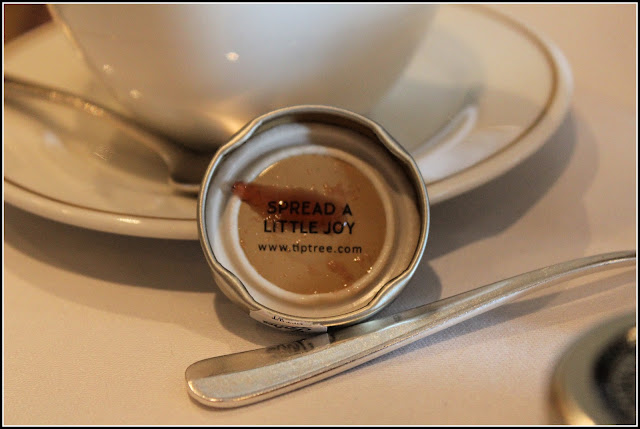 The two photos above were taken when we could go to Afternoon Tea in the Queen's Room.  It's a wonderful afternoon indulgence!

Grayden had the Librarian call me and had books sent to me.  I had bought a book already that I quickly finished while in isolation.  There is a quite extensive library on Cunard ships.  It was so nice to name favorite authors and have them sent to me.  Grayden also sent the camera to me as he thought I would enjoy photographing from my balcony.  He was right!

As the Queen Elizabeth approached Costa Rica is was nice to be able to at least photograph the island before me.

The Pilot Boat with the Harbor Pilot came to let him off to guide the Queen Elizabeth into the port of Puntarenas (Sand Point). 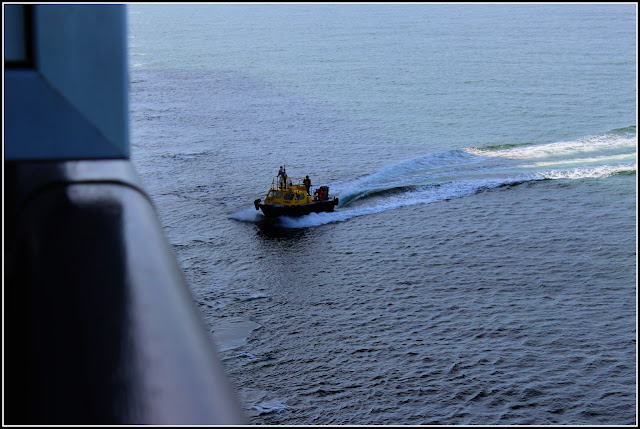 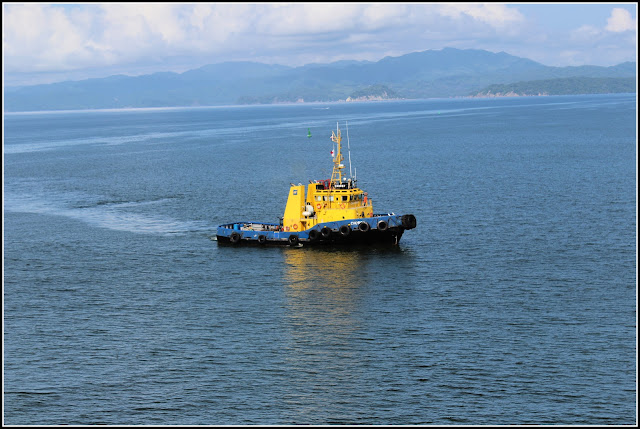 As you can see it's a lovely, beautiful, sunny day.  We have been to Costa Rica before.  It's a lovely place to visit if you get the chance.  This time we will enjoy seeing it from afar as we had to cancel our onshore excursion. 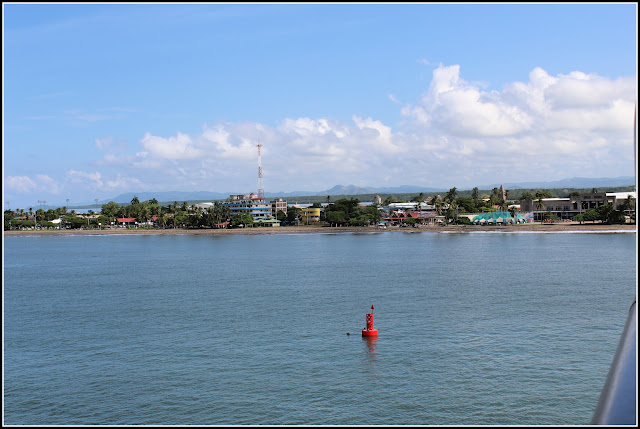 Costa Rica (rich coast) has a wide variety of plants and animals.  Being tropical you can imagine such diversity.  Costa Rica is known for their coffee production in the highland areas.  Puntarenas was not developed as a port until 1840 when coffee production reached exportable volumes.  Oxcarts were originally used to bring the coffee to the port and then railways were constructed as a more efficient means of transporting goods. 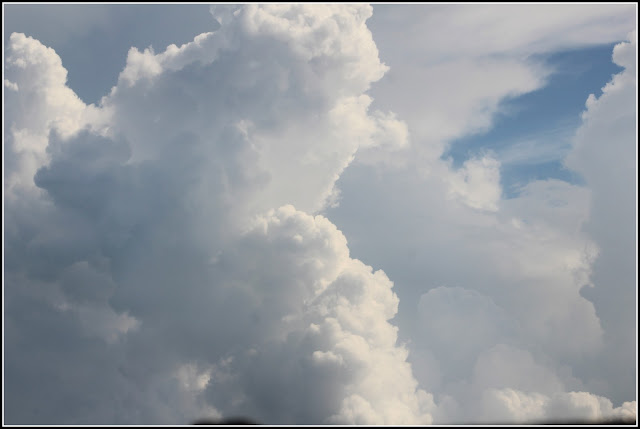 In the afternoon, I enjoyed my view and the glorious sunshine as I sat on the balcony and read. 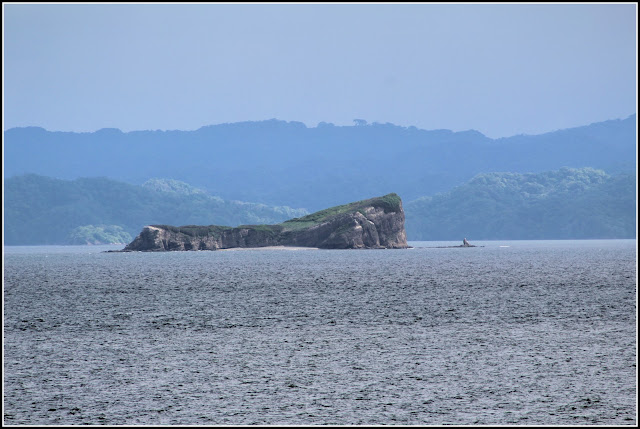 It was also a good time to do my nails and look for sea life and birds.
As the afternoon wore on I could see a storm brewing to the east. 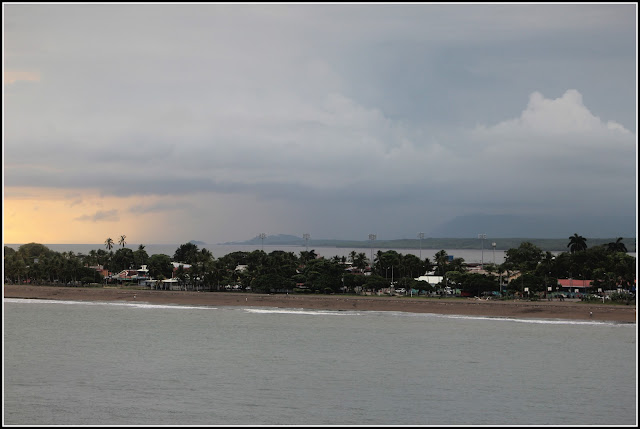 The sky began to darken quickly, but never reached the ship with its rain.  It did afford some lovely skies, though. 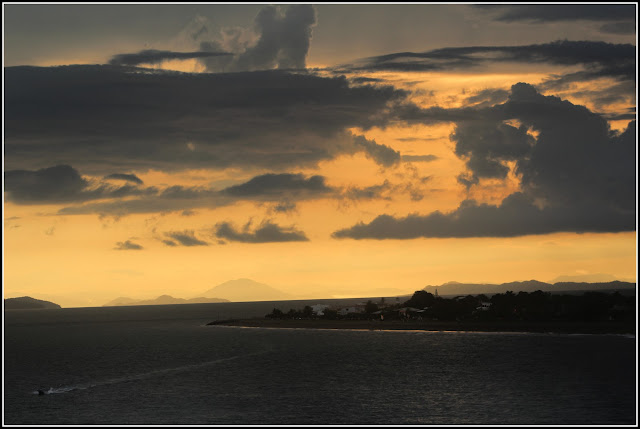 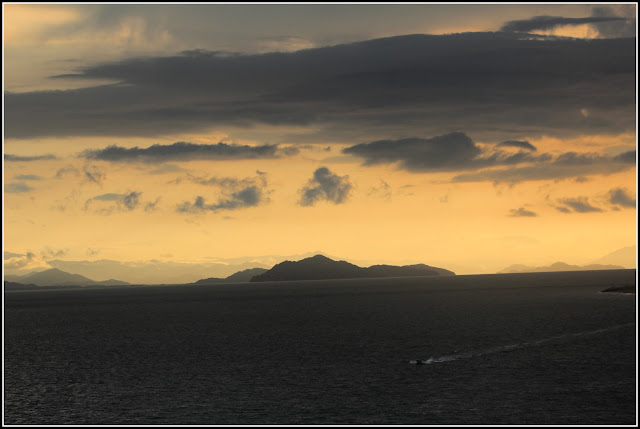 Don't you love seeing the golden hour after a storm? 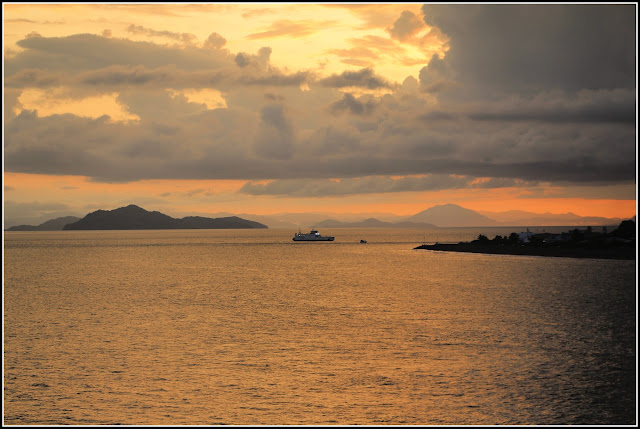 I certainly did that first day of isolation! 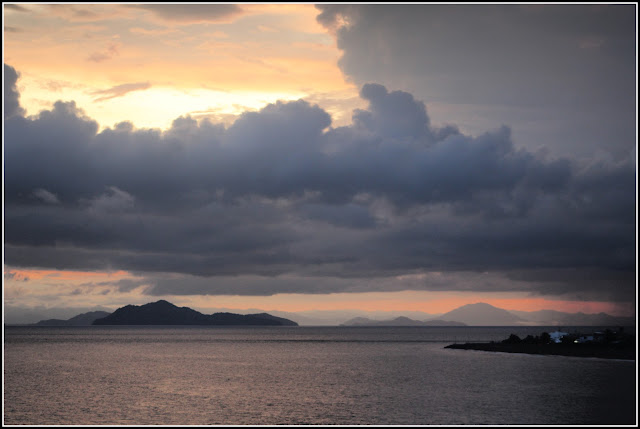 It's important to me to record this time as difficult as it was.  I am not a very social person and one would think this would be an easy time, but alas that was far from the truth!  Thank you for coming on this journey with us.  Next up we will be visiting Manzanillo, Mexico, if you'd like to see my views from my balcony.

Posted by The Joy of Home with Martha Ellen at 2:36 PM