Our Transit Through the Panama Canal

The Panama Canal was named one of the seven wonders of the modern world by the American Society of Civil Engineers in 1994.  It is indeed a wonder to experience!  Grayden and I enjoyed the full transit of the Queen Elizabeth on our recent voyage. 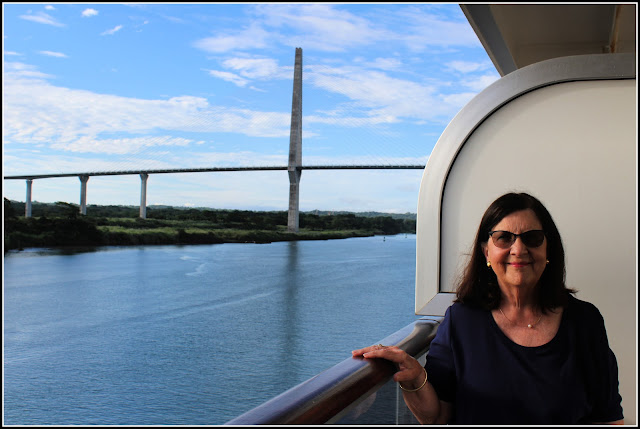 Approaching the Atlantic Bridge we excitedly prepared to journey the marine shortcut that saves distance and time and costs to goods that are shipped around the world.  We will travel the route that connects the Atlantic and the Pacific oceans at the narrowest point of the Isthmus of Panama and the Americas!

The first effort to build a route through Panama was first began by the French in 1880.  Disease and financial issues forced them to give up their initiative.  When Panama consolidated its independence in 1903, they agreed to let the United States begin constrution on a canal.  The USA took full charge of the canal until 1999 when Panama assumed full operation of the canal.  The waterway is managed by the Panama Canal Authority as an autonomous government entity. 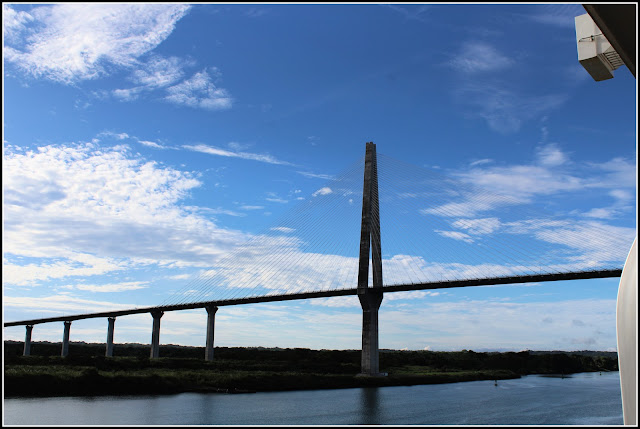 The canal operates through a series of locks, each with two lanes, which serve as water lifts that raise vessels to the level of the Gatun Lake that is 88 1/2 feet above sea level.  This allows the ship to cross the Central Mountain Range, and then lower it to sea level on the other side of the Isthmus!  Amazing! 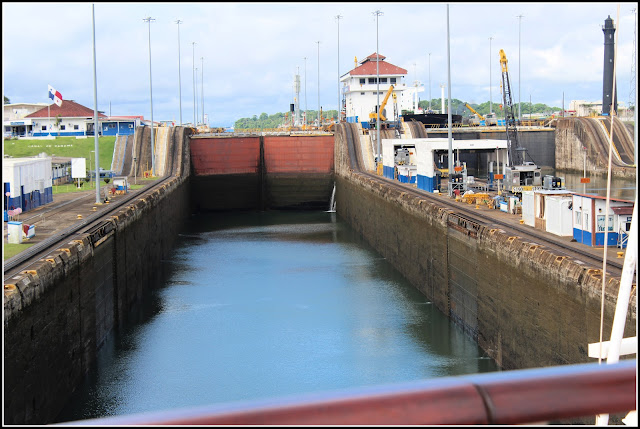 Everyone is excited to view the sights that are before us.

The water that is used to raise and lower the vessels in each set of locks comes from the Gatun Lake.  Gravity pours the water through the locks from culverts. 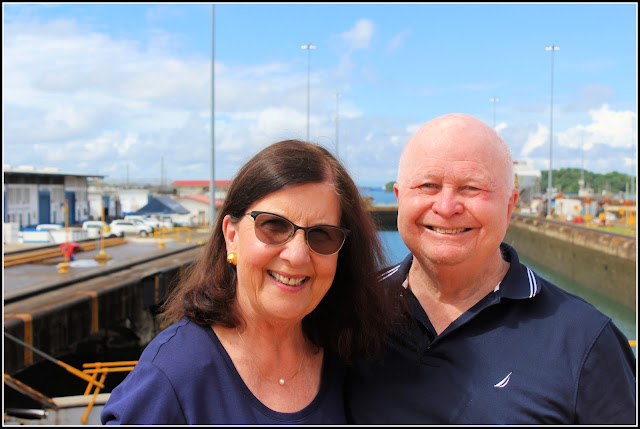 The tracks you see on the sides of the canal are for the locomotives that pull the ships through the locks.  It's a fascinating process to observe! 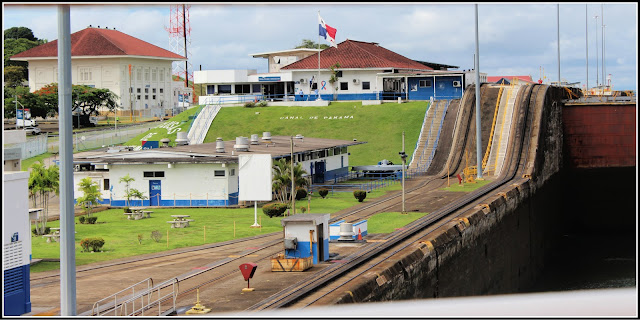 Men in a boat attach a guide wire to the ship on each side and then the locomotives muscle their way to the opening of each lock. 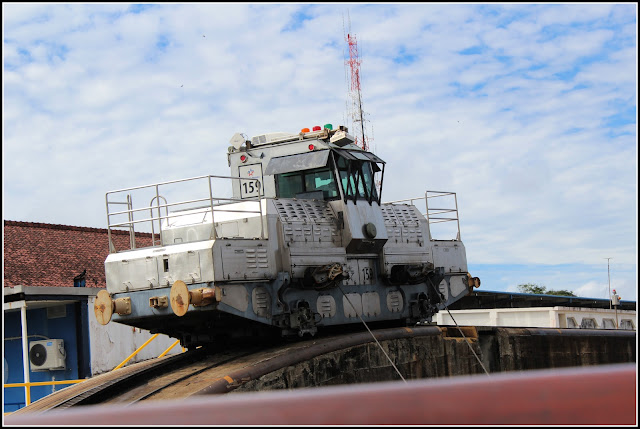 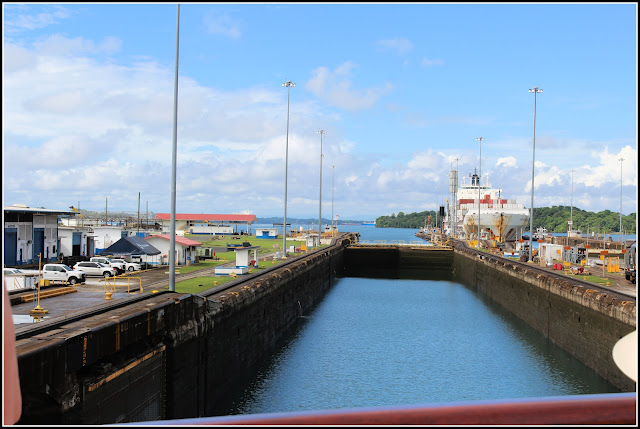 After going through the Gatun locks we see Gatun Lake ahead. 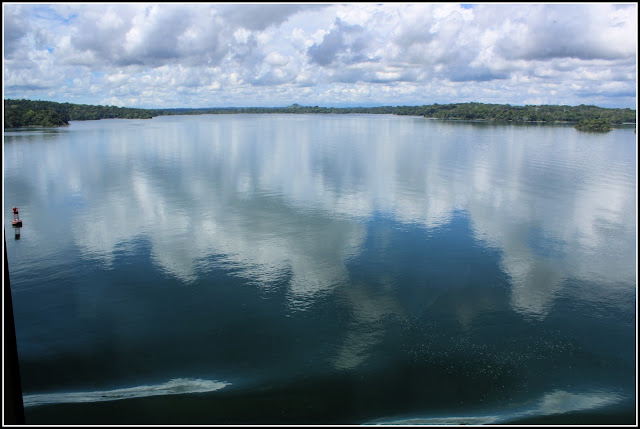 The process of transiting the Panama Canal is an all day process as there are about 50 miles to cover along with the three sets of locks.  It's a lovely journey as we sail along the peaceful waters. 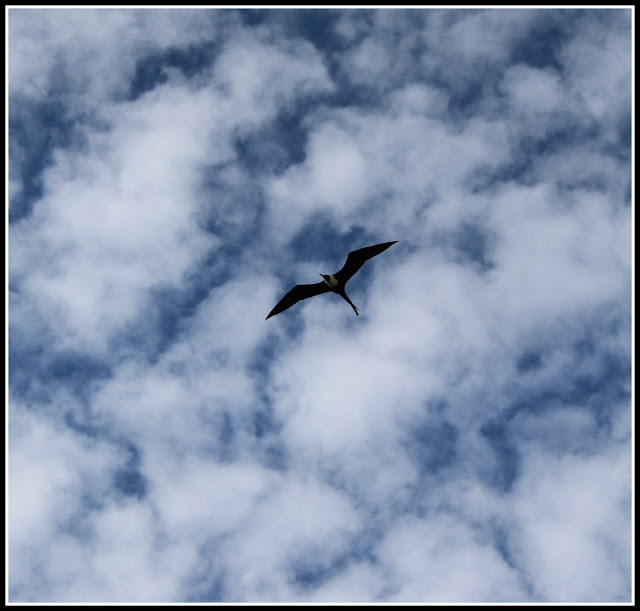 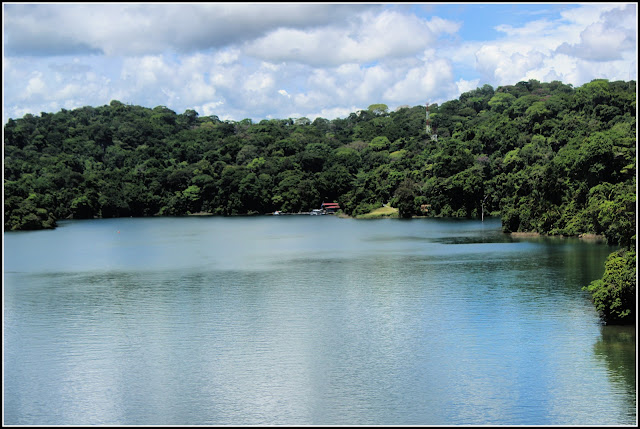 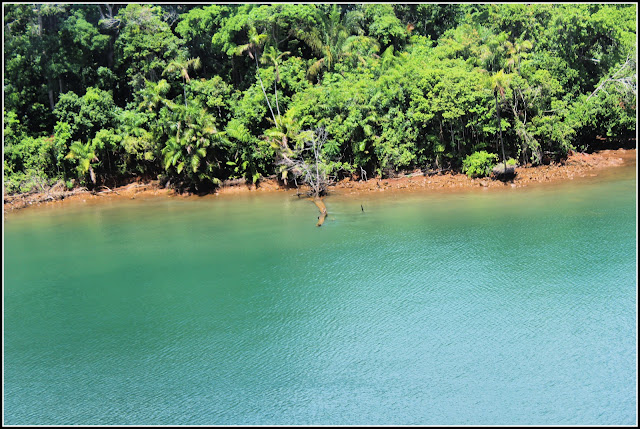 Sailing along we looked out for sea life.  We were told there are crocodiles that inhabit the area. 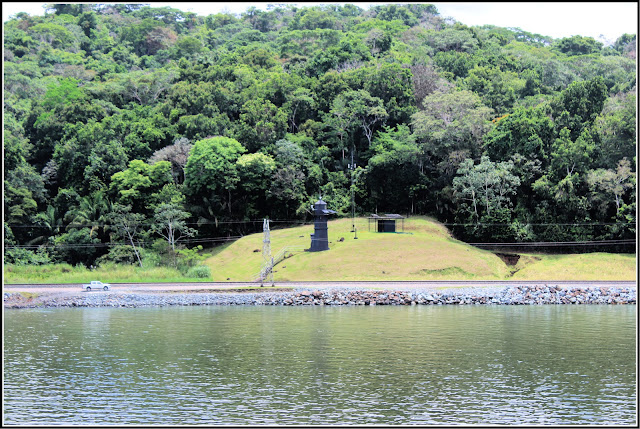 We didn't see them on this transit.  I don't think we'll be swimming here!  Though there was a man that did transit the Panama Canal swimming!  Richard Halliburton paid 36 cents to swim the canal in 1928.  Ships pay a premium to transit the canal based on weight and number of passengers. 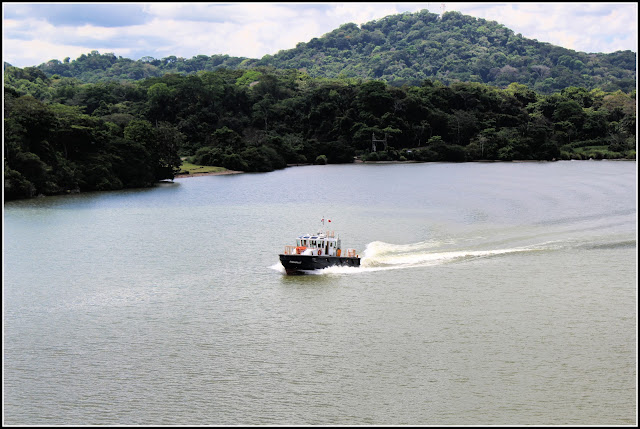 Soon we are approaching the San Miguel Locks. 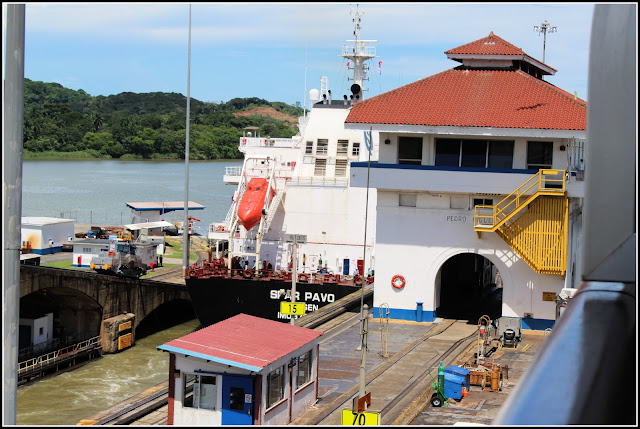 As technical as the locks and this system appears, they are still using men in a row boat to connect the guide wires to the ship! 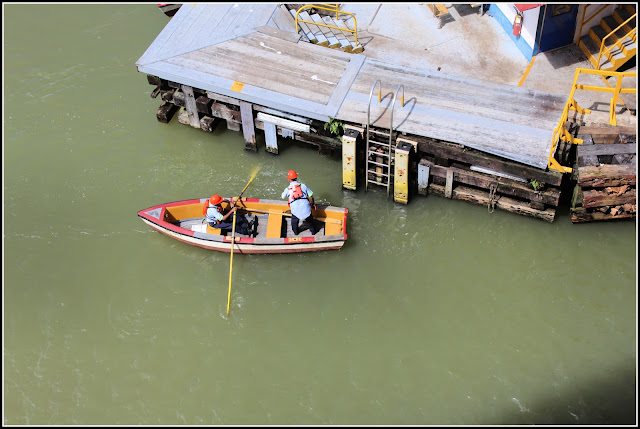 Sometimes the old ways are the best ways! 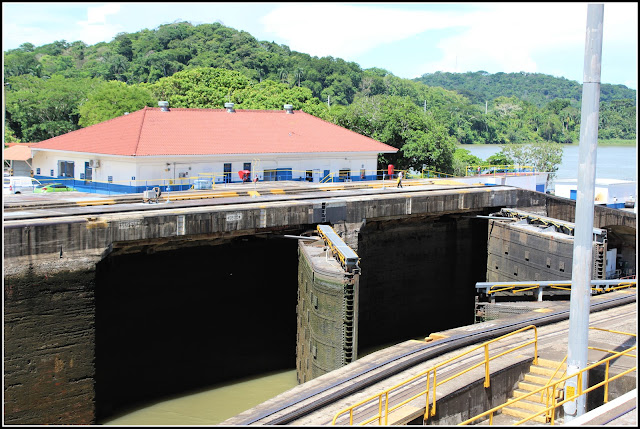 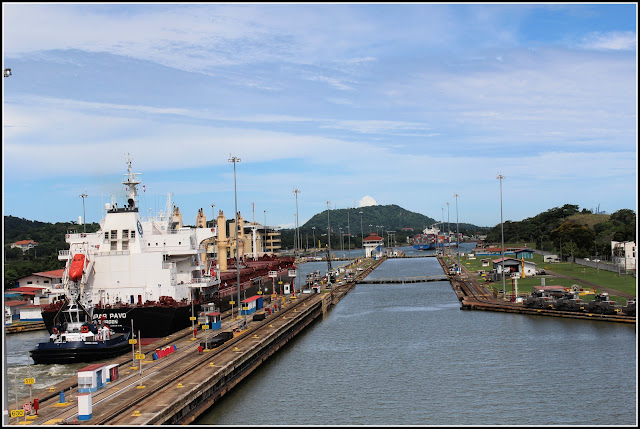 The last set of locks are the Miraflores Locks.  There is a grand stand viewing area to watch the workings of the canal if you are visiting Panama. 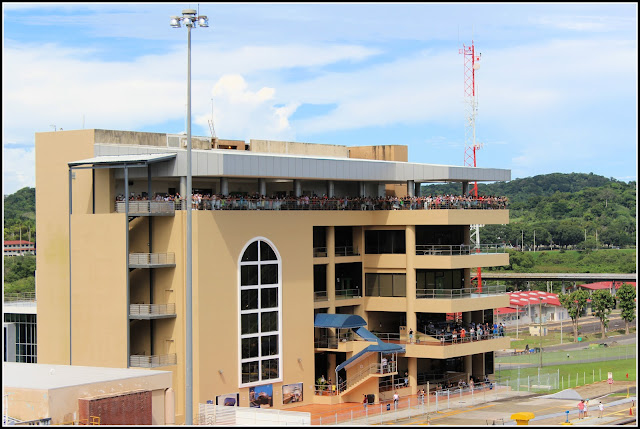 There were many folks viewing the Queen Elizabeth as she transited these locks.  It appeared to be school groups enjoying watching the lock system in action.  Engineering students would love learning and seeing this amazing process! 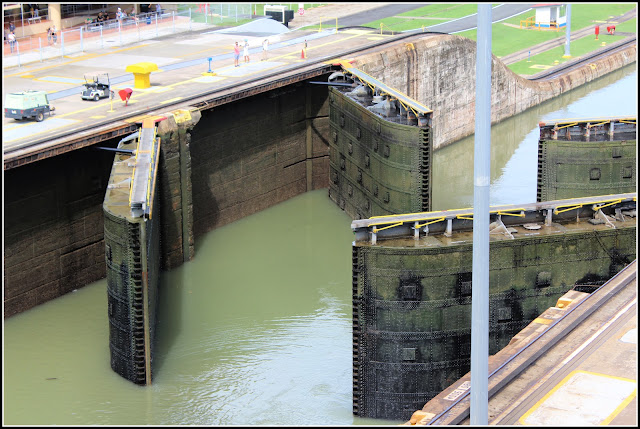 The Centennial Bridge is the second bridge that we view as we transit the canal. 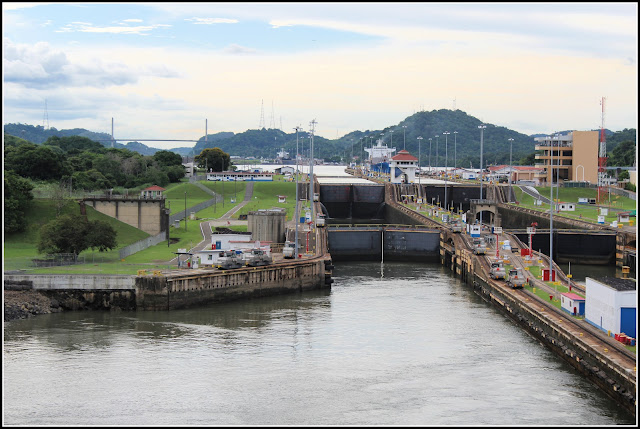 We were happy to see deer grazing in the grass along this area. 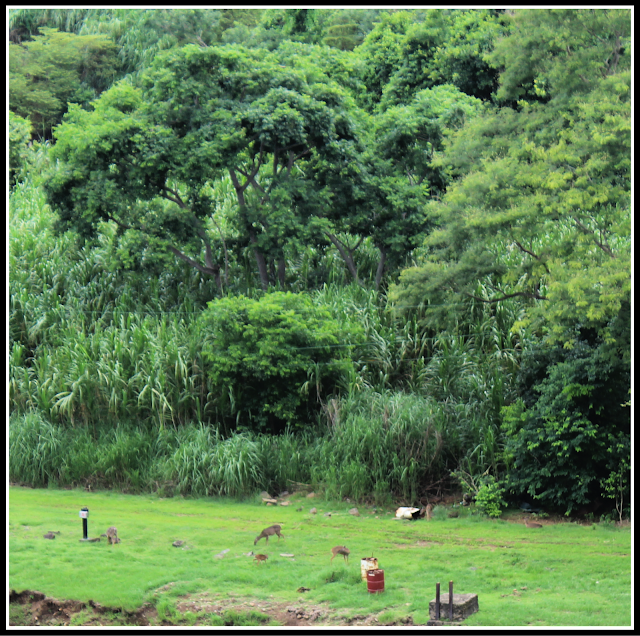 We are now entering the Pacific ocean as we pass under the Bridge of the Americas. 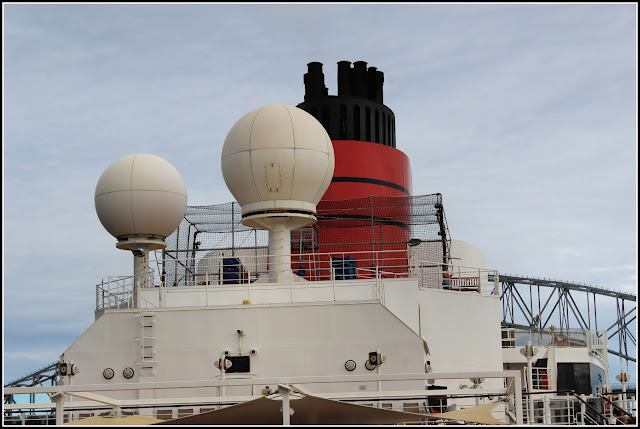 Grayden and I decide to go topside to view the Bridge of the Americas! 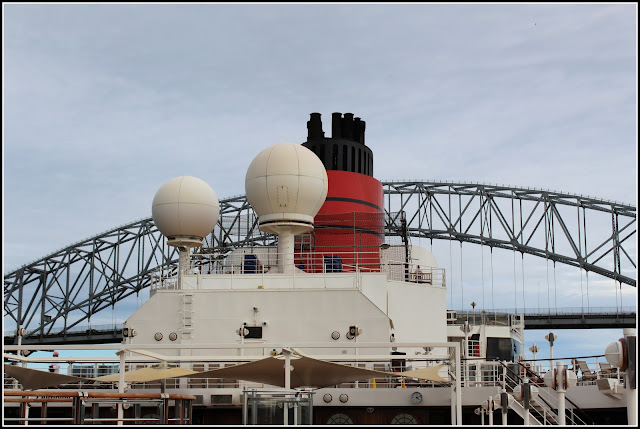 Don't worry, our Captain is a pro! 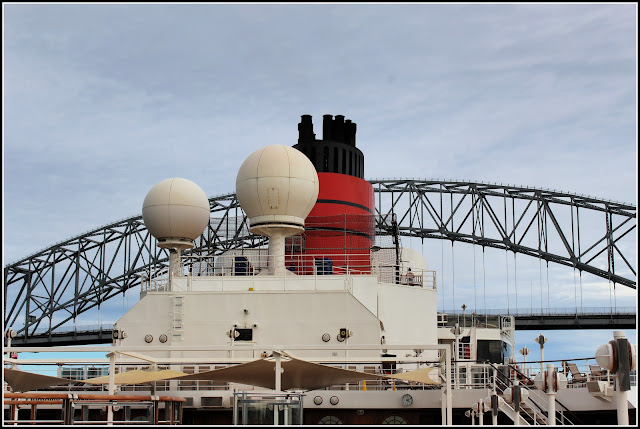 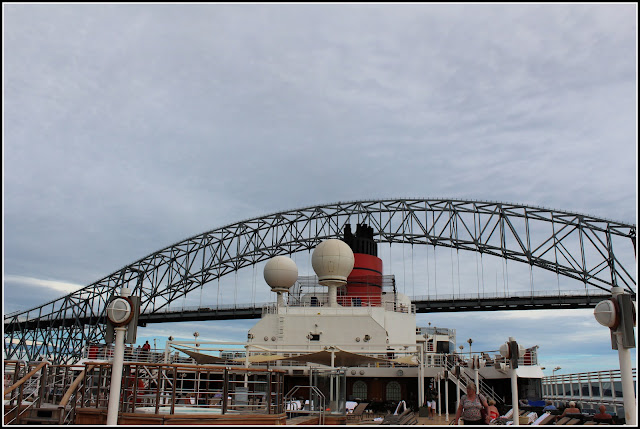 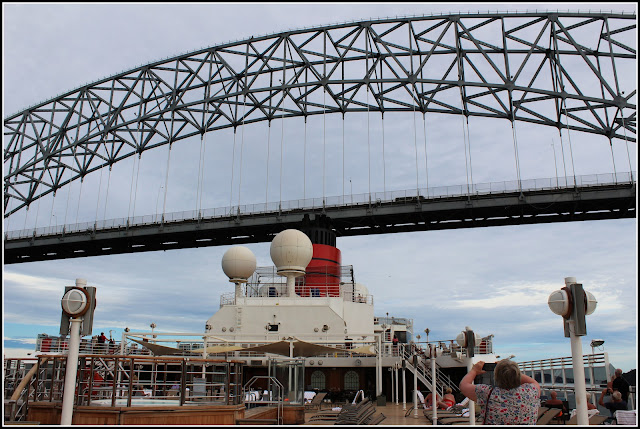 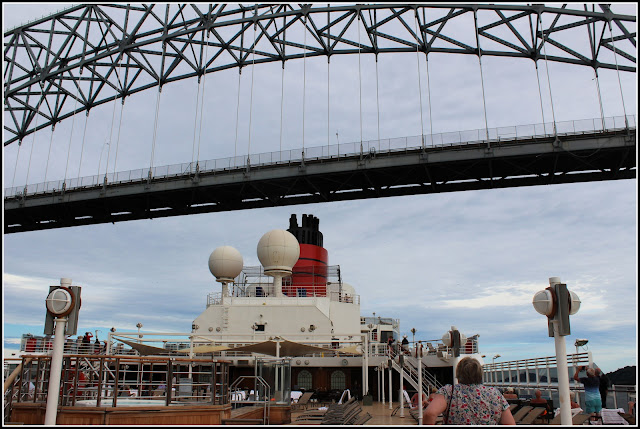 Looking back at The Bridge of the Americas we see the moon peeking through the clouds.  We enjoyed a lovely day traveling along these unique shores and marveling at the amazing Panama Canal.  It truly is a wonder of the modern world! 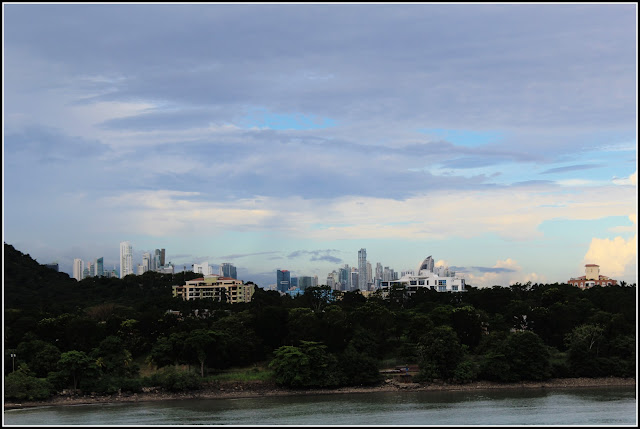 As we travel along the Pacific Panama City rises into view. 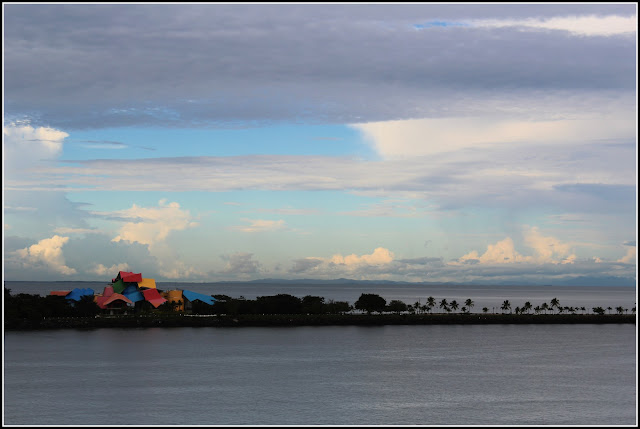 Thank you for coming along with us to the Panama Canal.  We will now be sailing along the Pacific toward Costa Rica.  I hope you will join me on our next adventure on our voyage.

Posted by The Joy of Home with Martha Ellen at 8:42 PM