The Island of Oahu

After leaving Maui, our ship made it's way during the night to the island of Oahu.  We were docked in the port at Honolulu.  What a surprise we had in store for us!  Honolulu was a fairly large city when we visited in 1971, but we both were so surprised to see how big it had grown!  The total population of Oahu is 953,207 and the population of Honolulu is 390,738!  No wonder there is so much growth of high rises and homes. 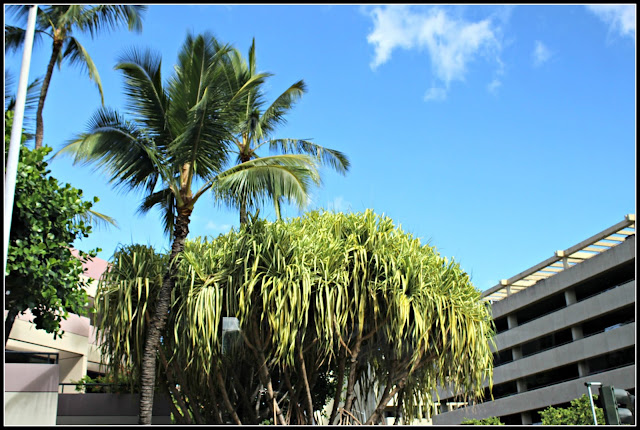 I imagine it's unfair of me to think everything will look like I remember from so many years ago.  Our little town is no longer little from that span of time either.

We booked an excursion that would give us a good look at the island.  We boarded our coach for an eight hour day that took us around the island to spots we wanted to visit. 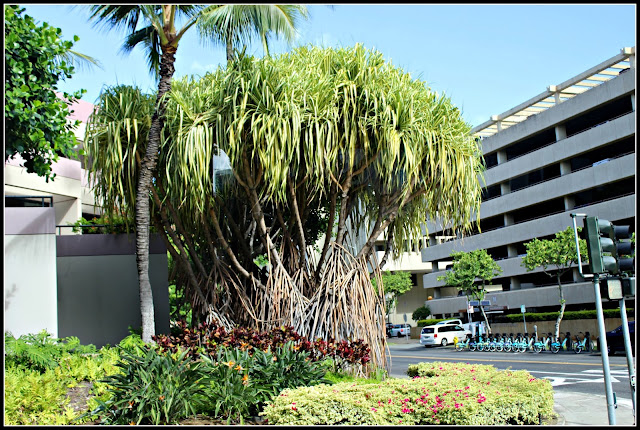 As I noted in my journal we had a beautiful day complete with a wonderful tour guide.  Our first stop was Pearl Harbor.  We had visited this memorial before, but felt we must do so again.  As we were getting off the bus for our tour there Grayden checked his pocket and discovered he didn't have his wallet!  Oh my goodness did that give us bad start to the day.  We reported it to our driver and he said he would be on the lookout for it, but we were pretty stressed about it.  I did not bring my purse so we didn't have any money.  I often don't bring a purse since having back issues. 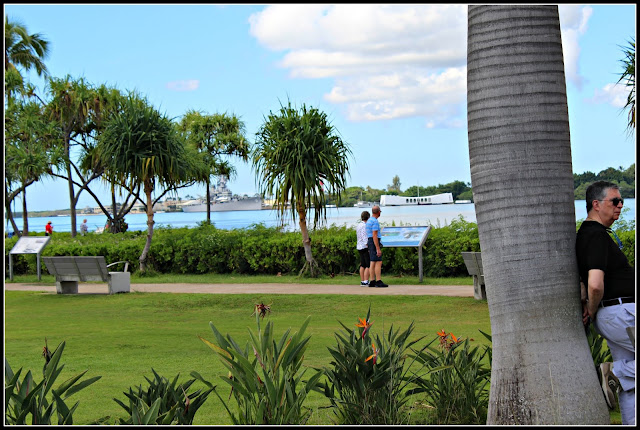 We didn't want this episode to spoil our day so we joined our group on this touching tour.

On December 7, 1941 Pearl Harbor was attacked by the Imperial Japanese Navy Air Service.  This surprise attack led to the United States entry into WWII.  Twenty one ships were lost or damaged during this attack.  All but three were returned to service for the United States Navy.  In Pearl Harbor, The USS Arizona was a total loss with 1,177 men perishing.  Their remains lay entombed in the harbor.  Men who survived this horrible attack and served on the Arizona have the right to have their remains entombed here. 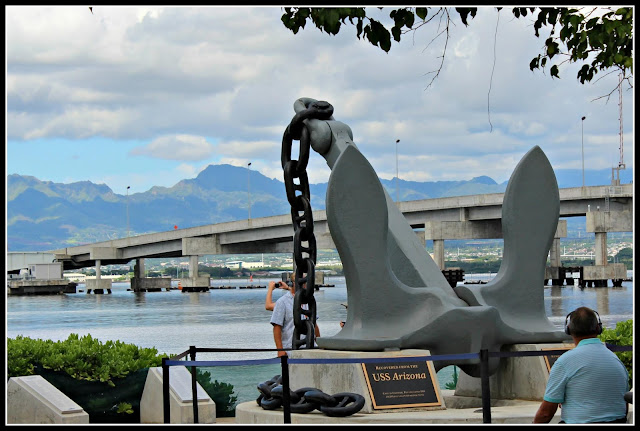 The memorial park is operated by the National Park Service in conjunction with the United States Navy.  This solemn and sacred park touched my heart to the core.  Having been here with young eyes, I must say I saw it with a different reverence on this day.  We began our tour by watching a movie about the events of the day and then boarded a boat skippered by Naval personnel to get a more close up view. 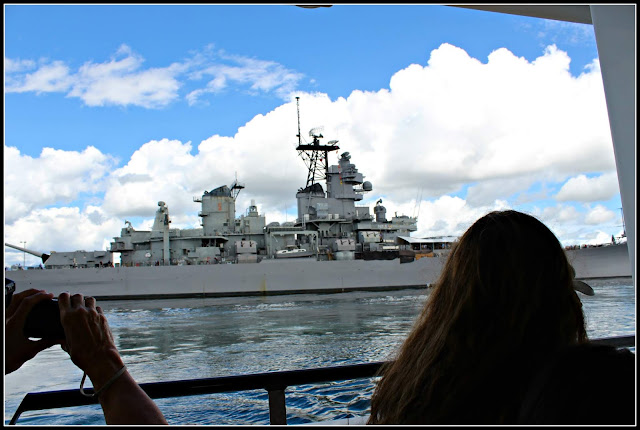 The USS Missouri is the first ship we pass.  This is the ship that hosted the signing of the surrender of Japan that ended WWII. 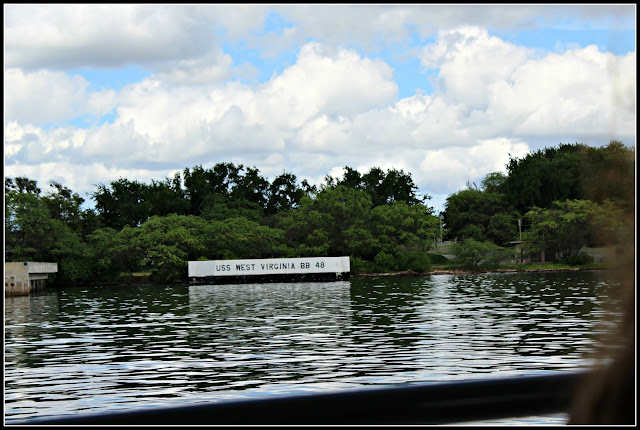 The USS West Virginia was sunk by Japanese torpedoes and a bomb from the air. 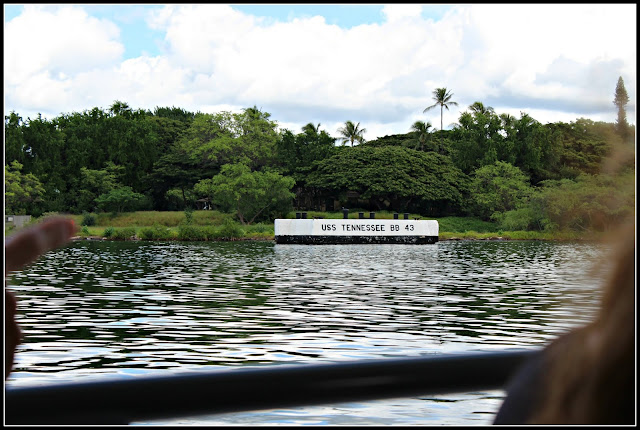 The USS Tennessee was hit by two bombs that incompletely detonated. 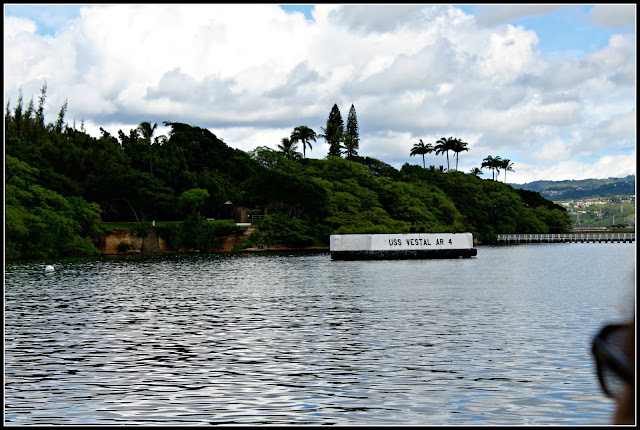 The USS Vestal, a repair ship, was hit by two bombs intended for more important vessels. 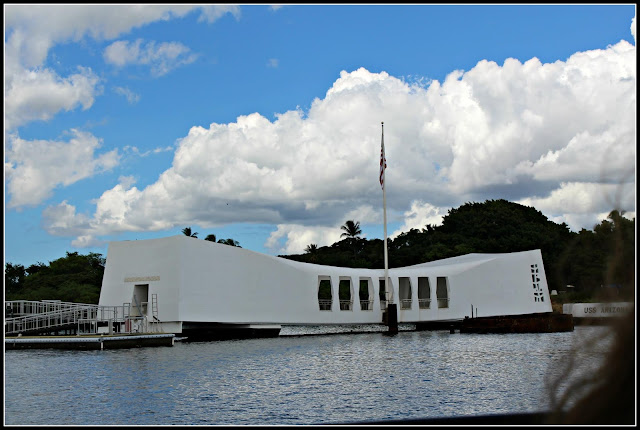 We then slowly approach the USS Arizona.  There is complete silence aboard as we make our way along Battleship Row.  The design of the Arizona memorial is attributed to Alfred Preis who was detained at the beginning of the war because of his Austrian birth.  The design is meant to represent defeat in the center and victory on the ends.  The Arizona is no longer in service but is an active U.S. Military Cemetery.  2,335 military personnel were killed. 2,008 Navy personnel, 109 Marines, 218 Army, 68 civilians, making the total lives lost 2,803.  Wounded came to 1,143. Total Japanese loss was 55 men. 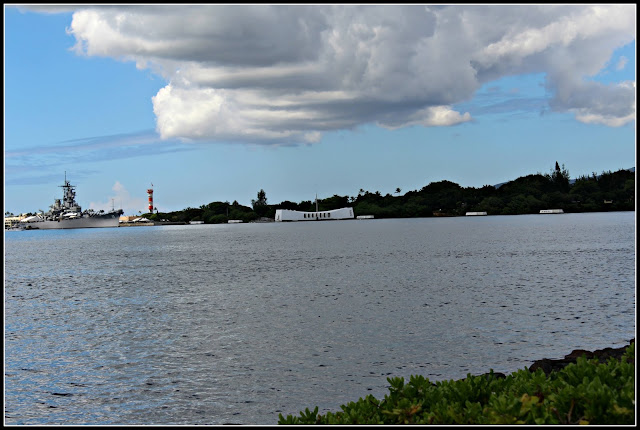 We had to stop and reflect on these horrible events.  How can such hatred exist?  I do not know and I must say I worry about it for my grandchildren.  Dear God, please teach us to love one another. 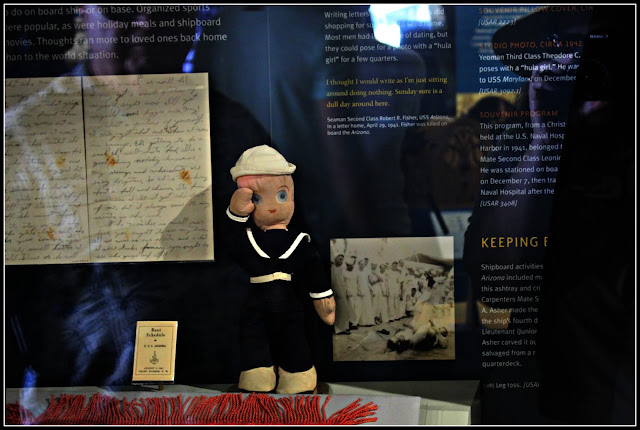 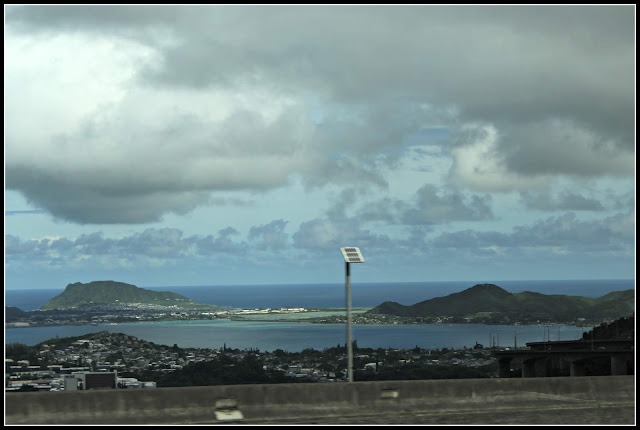 As we were leaving Pearl Harbor I couldn't help but photograph such a lovely peaceful harbor and remember it was not peaceful at all on December 7, 1941. 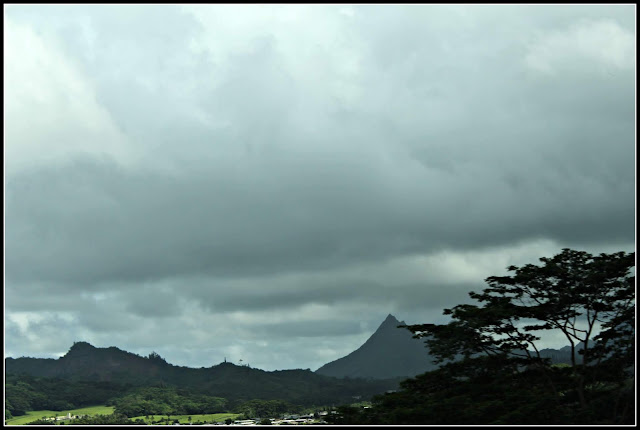 Riding along the Interstate H3 (yes they have three interstate highways on the island) we are treated to glorious views as we make our way to the North Shore. 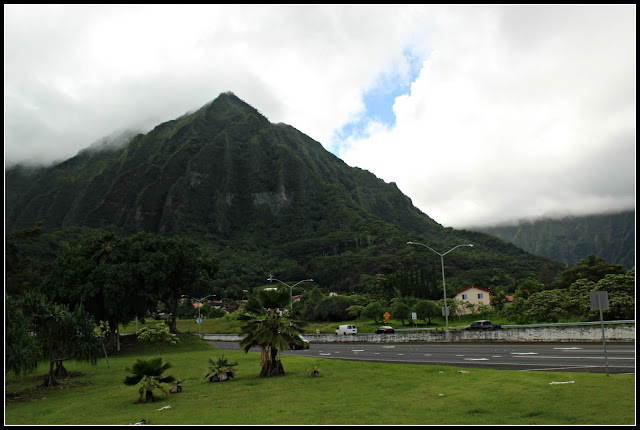 Our tour guide reminds us that we are going to stop for lunch soon.  Grayden and I look at one another and say--no money, no lunch for us! 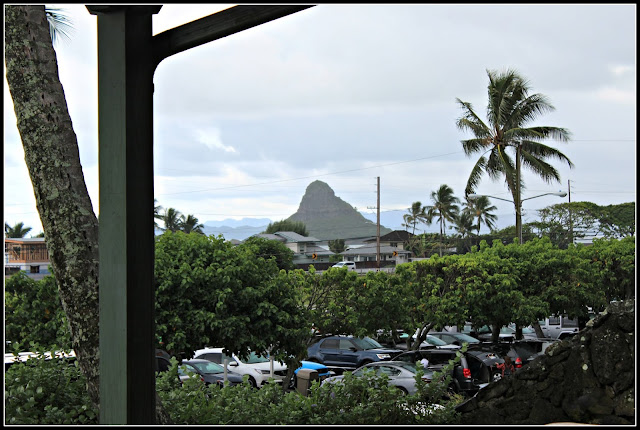 We go inside and look around at the gift shop and our guide sees we are not in line for the lunch buffet.  We remind him we have lost a wallet and he says--"Oh your meal is included with this tour."  I can tell you there was one man very happy to hear this. 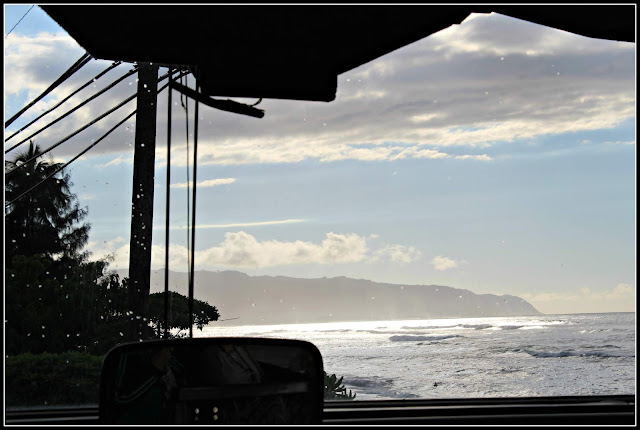 After lunch we continued on our tour of the lovely North Shore.  As you can see we had rain off and on, but still enjoyed the beauty before us. 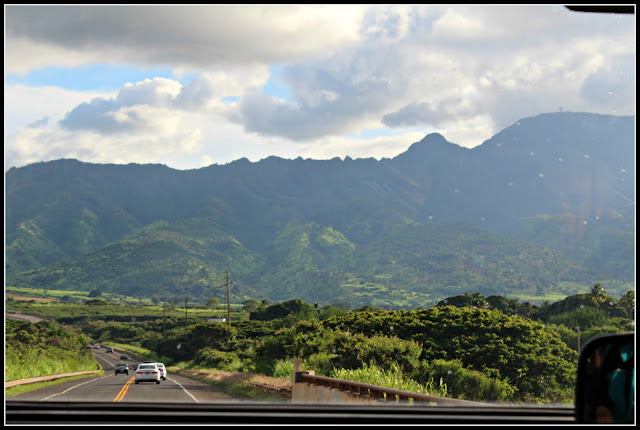 We were told that portions of Jurassic Park was filmed in this area. 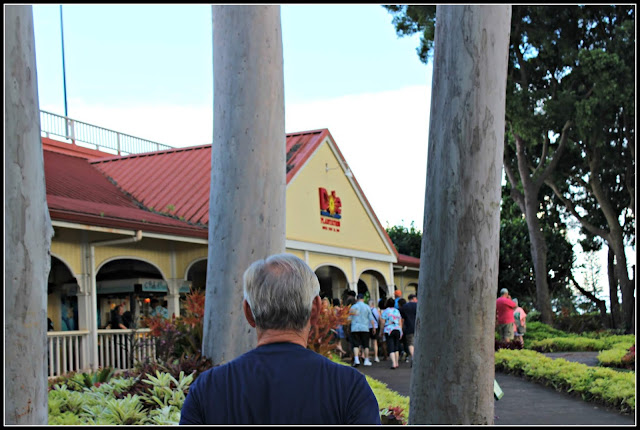 Next on our visit was a stop at the Dole Pineapple Plantation.  Sadly the pineapple companies of Hawaii have left like the sugar cane.  There are fields of them for Hawaiian consumption.  The old fields are now being developed into subdivisions. 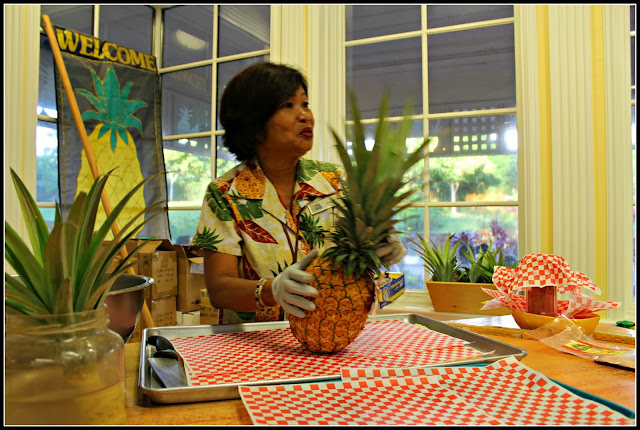 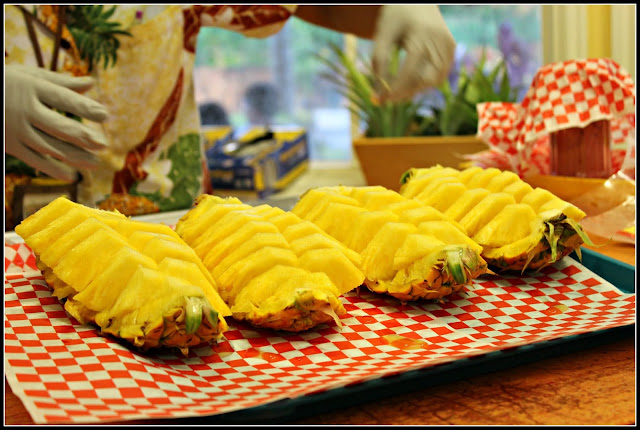 This was the sweetest pineapple we have ever tasted!  We were happy to end our day on a sweet note.

As we boarded the ship we both wanted to head straight to our cabin and see if Grayden's wallet was there where he thought maybe he had left it.  We went into the room and didn't see it anywhere.  Then we opened the safe and there it was!  That sure made the end of our day feel much better.  It was an emotional day in a lot of ways for us.

Posted by The Joy of Home with Martha Ellen at 3:55 PM